WL: Hoag – “We have system and guys believe in it”

Canada coach Glenn Hoag said there is still room for improvement despite his side claiming their first ever win over volleyball giants Russia during the World League Finals pool play on Thursday. 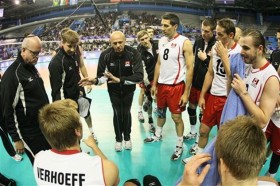 Glenn Hoag pleased, but wants more from his proteges

“I’m very happy [with the win], it’s a big step for us to come here, our program has evolved in the last six years and this is a great accomplishment, but this tournament is far from over, and it’s going to be a big fight tomorrow against an excellent team again”, said Hoag and added:

“I wasn’t so happy with the way the guys played [at the start], we were overdoing things, I just wanted them to play the way we practiced, the way we’ve been playing lately.”

Canadian couch also said: “The guys are confident about competing against any team, they’re not scared of anybody, they have faith in the system we play with. Tonight wasn’t a great example of that, we can do much better, but I was pretty pleased.”

To read more news from this competition, click on World League 2013.

WL: Travica – “We played with big heart in difficult moments”