The Peruvian Youth national team is already in Thailand to participate in the 2013 FIVB U18 World Championship due to start in Nakhon Ratchasima on Friday, July 26th, until August 4. 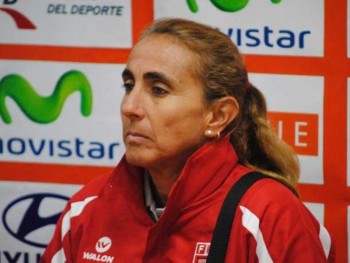 The new ‘Matadorcitas’, as they are affectionately known, were drawn in Pool D along with 2011 tournament winners Turkey, a powerful Italy, Mexico and Chinese Taipei.

Under the direction of coach Natalia Malaga, the Peruvians qualified for the elite event after winning gold at the 2012 Girls’ Youth South American Volleyball Championship in Lima.

Peru will start their campaign against Mexico on July 26th, before their match against Italy on July 27th. They will then take on Chinese Taipei on July 28th before closing the first round against Turkey on the 29th.

In a recent article published by world’s volleyball governing body FIVB, coach and former star player Malaga said she expects a lot of this team as “they grew up together and are more compact as a team.”

BUL M: Naydenov and Placi in the...