For the first time in history the Volleyball Federation of Serbia is organizing an International Referee Candidate Course (IRCC) that got started on Sunday in the city of Kladovo. 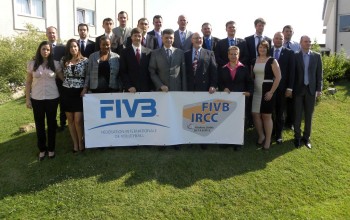 Mr. Slobodan Milošević, Secretary General of the Volleyball Federation of Serbia, addressed the participants on behalf of the national federation and wished them all the best in their future work for the good of Volleyball. Mr. Sergey Titov from Russia, FIVB Refereeing Commission secretary, will act as the course director, whereas Alexander James Steel from Scotland, President of the FIVB Rules of the Game Commission, is the course instructor. The course will come to a close on Sunday, August 4.

There are 18 candidates from 14 countries in attendance: Nikola Kozić from Bosnia and Herzegovina, Uladzimir Kukashynau and Kanstantsin Asipchyk of Belarus, Morten Klein of Denmark, Dominik Biegajlo and Sebastijan Widlarz from England, Loic Queste from France, Mirko Till and Janita Richter from Germany, Agnes Batkai-Katona from Hungary, Iris Stojcic and Yael Dotan of Israel, Abbas Ahmad from Kuwait, Daniel Jettkandt from the Netherlands, Szymon Pindral of Poland, Shirlon Hunte from Saint Lucia, Volodymyr Bosenko from Ukraine and Tomislav Popović from Serbia. During the course, all candidates will referee matches of the 2013 Junior Men Balkan Championship.

The first course for the International Referees in 2013 was held in Congo, from July 12 to 21, the third one will take place in Indonesia, from October 14 thru 22, and the fourth in Senegal, from October 20 to 31. The courses for Beach Volleyball referees will be held in Sudan, Philippines and Liechtenstein.

ZIM: Zimbabwe goes to next round of WC qualifiers