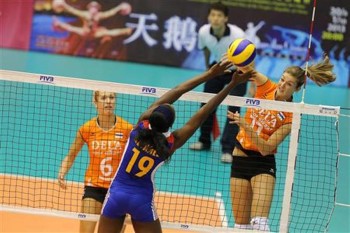 The Netherlands stunned Cuba in the starting set with an onslaught of the Cuban defense. The Netherlands players capitalized on their middle hitting, which gave them an early lead of 6-2. The Cubans reinforced the attacks from the wings and were successful in their attempts to cut down the distance to two points after the first technical timeout.

It was then an even game, which neither team could establish more than a three-point lead. With the help of more strong attacks, the Netherlands took the first set at 25-20.

In the second set, the Netherlands came out more determined and managed to take the leads at both technical timeouts. Poor passing and unforced errors by the Cubans saw the Netherlands leading throughout the set, winning 25-14.

The Netherlands continued their excellent blocking and wing hitting game in the third set, which was the key to their straight sets win. The Netherlands found seams on the Cuban court and hit on these areas with ease, finishing the last set 25-11.