Japan, China, Italy, Serbia and Brazil: the five undefeated teams after the first weekend of action, line up for their next test as the World Grand Prix moves into the second of its three Preliminary Round weekends starting on Friday. 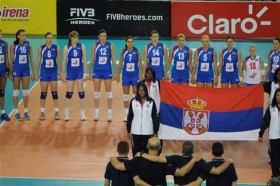 A particularly difficult task awaits European champions Serbia. The team from the Balkans will face defending champions USA on home soil in Belgrade. Under new star coach Karch Kiraly, the Americans lost 3-1 to Olympic champions Brazil on the opening weekend – a defeat that brought to an end a World Grand Prix record run of 18 consecutive wins.

Eight-time record winners Brazil have set their sights on a shift in the balance of power: having opened with three wins, the world No. 2 are aiming for another three victories in Puerto Rico this weekend – however, they will face another two teams that also have two wins to their name, in the form of the Dominican Republic and Bulgaria.

Olympic bronze medalists Japan are also among the five undefeated teams after the opening weekend. As such, sixth place in the Preliminary Round, which this year features a record 20 teams, should be sufficient to guarantee a place at the Finals. Current overall leaders Japan will be put to the test in Plock against hosts Poland, Kazakhstan and Germany.

The Chinese, who also have home advantage in Hong Kong this weekend, are yet to suffer a defeat. Their toughest opponents could well be the third-placed team in last year’s World Grand Prix: Turkey. The surprise of last year’s tournament is well positioned with two wins to their name.

The fifth undefeated team, Italy, also have a tough assignment in their pool this weekend. The group in Ekaterinburg, Russia pits them against last year’s outstanding performers Thailand, who recorded their best ever result in 2012 finishing fourth, winless former World Grand Prix winners Cuba, and Russia. The reigning two-time world champions are out for revenge after opening with two unexpected defeats.

To read more about this competition, click on World Grand Prix 2013.