The volleyball just got Taubaté, and the team is already thinking about assembling the strong selection. 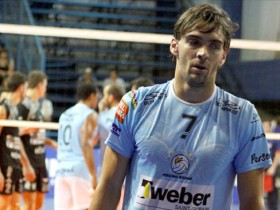 FUNVIC/Taubaté Vôlei, which opens the Superliga campaigne tonight, could receive the reinforcement of one of the greatest players of all time: the receiver Giba, Olympic and World champion with the national team of Brazil.

According to Ricardo Navajas, the team’s boss, the 36 year old player entered into negotiations with Taubaté.

“We will talk this week with his manager. Everything depends on a company that wants to sponsor him and has influential business here in the Valley of Paraíba,” said Navajas, without giving many clues.

Navajas, the responsible one for bringing the team to Taubaté after several seasons in Pindamonhangaba, commended the possible hiring. “Despite he is a 36-year-old, Giba is one of the best. Our team, although competitive, is young and new, and need some experienced guys”.

Currently, Giba is playing in Bolivar, Argentina and he is one of the most successful athletes in history of Brazil.

PHOTO OF THE DAY: Marcelo Mendez –...