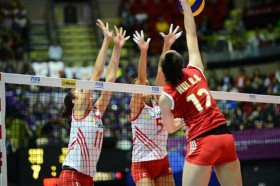 The two undefeated teams in Pool I got off to an even start in the first set. Encouraged by the overwhelming crowd of 9,000, China started off with great determination, but Turkey did not let them get away and gradually stretched the lead to 16-10 at the second technical timeout. China could not turn the game to their favor, losing the first set at 19-25.

Both teams played efficient attacks from the beginning of the second set. China geared up with the help of rising star Ting in various kills and jumped to an 8-4 lead entering the first technical timeout. Taking advantage of their momentum China continued playing impressively through solid spikes and tough blocks to claim the second set 25-17.

In the third set, China started strong, having a seven-point lead by the first technical timeout. As Turkey struggled to get the right breaks as their spikes barely penetrated the Chinese blocks, one devastating spike by Ting put the seesaw set to an end at 25-20.

Early in the fourth set, Turkey wasted their chance to pull away with repeated errors in attack, letting China overtake the lead at the first technical timeout (8-5). Turkey gradually came back with good attacks and digs, earning a two-point advantage at the second technical timeout (16-14). China began to lose their concentration and could do little to catch up. Turkey eventually took the set 25-15, taking the match to a tiebreak.

The tiebreak became easier for the Chinese women, as they showed good team spirit and maintained powerful attacks, especially by attacker Ting, resulting in China’s win 15-10.

China’s Ting Zhu continued to be her team’s top scorer with 23 points. Turkey’s captain Darnel Neslihan led her team with a total of 24 points.

See the profiles of China and Turkey.