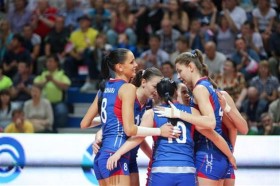 In the first set Russia started to control the situation on the court and the score was 8-3. Cuban head coach took a time-out when the score was 13-7 but this couldn’t help them. In the end of the set Russia easily won 25-17.

In the second set Russia got an advantage from the beginning 8-3 and kept it to the second technical time-out 16-9. Despite of two time-outs of Juan Carlos Gala Rodriguez and his substitutions the second set ended with beautiful attack of Anna Matienko 25-14.

In the third set Cuba started to lead the score for the first time into the match 8-5 at the first technical time-out and soon 13-9. Yuriy Marichev took his first time-out, but this did not bring any fruits, Cuba gained 8 point margin and won the third set 16-25.

See the profiles of the national teams of Russia and Cuba.

GER M: Grozer is back!