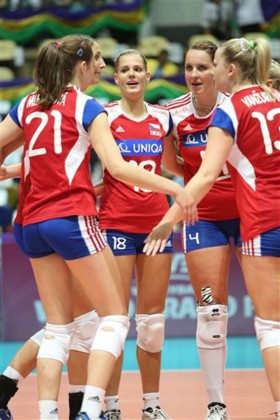 Having lost two games in Pool I, set one began as a thrilling encounter between the two teams right at the start as both fought for their first victory. Argentina was forced to call for a timeout at 9-12. Czech Republic maintained their lead and without much pressure to seal the set 25-20.

Havlickova’s bullet serves and attacks enabled Czech Republic to take an early lead in the second set (8-3). Yet when the game resumed, even though Czech Republic showed great determination in attack, particularly Mlejnkova, the youngest player in the team of Argentina, Emilce Sosa, eventually managed to pull away with solid defense and ended the set 25-21.

Pressure intensified with Argentina widened a five-point gap at 12-7 in the third set. Czech Republic united and successfully limited Argentina from further widening the gap taking charge of the set 25:22.

With exceptional serves and blocking, Argentina controlled the fourth set with a 5-0 run, scored high at 8-1 at the first technical timeout.  The women of the Czech Republic battled back and jumped ahead with one point at the second technical timeout, at 16-15. Neither team allowed each other any breathing space until late in the set. Czech Republic surged ahead and gained their first victory in the 2013 FIVB World Grand Prix in Hong Kong, winning the set 25-20.

The Czech Republic’s captain Aneta Havlickova helped lead her team to victory, with 25 points in the match, of which 24 were attacks. Argentina’s Emilce Sosa was the top scorer for her team, with 18 total points.

See the profiles of Czech Republic and Argentina.