The team from São Paulo, Uniara/Araraquara, may be invited to participate in the Superliga 2013/2014. The invitation should be delivered by Brazilian Volleyball Federation (CBV). 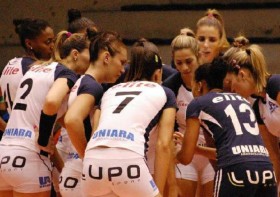 If that is confirmed, Superliga will stay with 14 teams, relying on the newly created Jacareí to participate. Still, coach of the team from Paraíba Valley, Robson Guerreiro Robinho, was discharged and the players still haven’t received wages because of lack of funds promised by Robinho. If they don’s realize the negotiations with other new sponsors, the team could be shut down next week.

The Uniara/Araraquara is an old acquaintance of volleyball in São Paulo. Always running for state competition at the level of special division, they have served as a step into the careers of young Brazilian talents such as Mayhara (Praia Clube), Vivian (Pinheiros) and Ju Nogueira (Amil), all thanks to the good work of the coach Sandra Leão and her assistant Samanta. If the invitation is accepted by the team management, the interior of São Paulo should gain a representative in Superliga.

The new gymnasium in Araraquara was opened last month with the presence of the volleyball ambassador, Maurício.