WCHJ M: USA coach – “We want to be at medal podium”

USA U21 team played a friendly match against heavy favourites Russia at “Ataturk Hall” in Izmir to put the last touches of their preparation for the World Championship due to start in Turkey on Thursday. 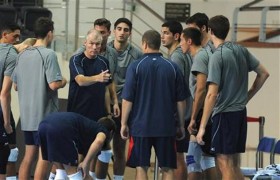 USA coach Hanson with his proteges

The objective of the head coach Peter Hanson is to be at the medal podium at the end of the competition, something not achieved in the U.S. history at this age category.

“We had difficult times during our preparation having less than three weeks to prepare for this competition due to the tight schedule of the local competitions as well as the cancelation of a friendly tour in Costa Rica,” Hanson said.

“However, we had a local training camp where we prepared well for the event. We have new players after the last generation finished at the fourth position two years ago in Brazil, so we need to improve that result here. We are happy to be here among the top teams from all over the world, but anyhow, we need to be on the podium this time,” he added.

USA will play in Pool C along with Serbia, Tunisia, Canada and Rwanda where the top four teams will proceed to the round of 16, while the fifth ranked team will compete for the last four possible positions, from 17th to 20th.

This is the seventh participation for USA at this age category with their best performance finishing 4th in 2011, while they finished 7th in three other occasions.

See the WoV Community profile of USA U21 team and coah Hanson.