Serbia, without their resting big gun Uroš Kovačević, outclassed Tunisia in a (25-17, 27-25, 26-24) in Pool C match of the FIVB Men's U21 World Championship at “Ataturk Hall” in Izmir, Turkey. Tunisia led in both, the second and third set, before they lost crucial points because of small mistakes. 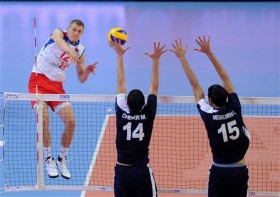 Although Serbian coach gave rest to some players, like the captain and senior team promising star Uroš Kovačević, Serbia controlled the net action in the first set and widely led throughout the set by the efficient spikes of outside hitter Milan Katić and opposite Dražen Luburić to win the set comfortably 25-17.

Tunisia came back aggressively at the beginning of the second set as they led steadily through their proper reception and backline defence. Their outside hitter Malek Chekir played a great role. They lost two set points before Serbia succeeded to come back and succeeded to win the set following two spikes from Mihajlo Stanković 27-25.

Tunisia made it a tight start also in the third set with Elyes Garfi playing a great role with his powerfull attacks, but like the second set Serbia came on time through winning the crucial match points to win narrowly 26-24.

Mihajlo Stanković led Serbia ‘s scorers with 17 points, Milan Katić scored 13, while Tunisia‘s middle blocker Elyes Garfi, who played as an outside hitter to replace injured captain Ousama Mrika, was the best from his side – 15 points. Malek Chekir scored 9.

For more photos from this match, click on Galleries.

Introduction to fitness testing for volleyball