Introduction to fitness testing for volleyball

Volleyball is a sport in which both skill and fitness play a very significant part. 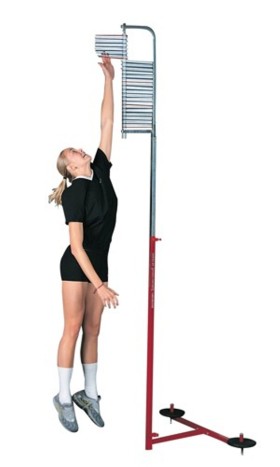 There would be different fitness demands whether playing indoor or beach volleyball, though this discussion is about fitness testing for volleyball in general.

Listed below are some suggested tests, but there are many other tests that you could use.

Though there are different fitness requirements for the different playing positions, all players on a volleyball team need to be able to play in all positions at some time, so all the following fitness tests would be relevant.

2) Maximal strength tests for specific exercises should be conducted.

3) Abdominal muscle function should also be tested, for example using an abdominal strength or endurance test.

1) Acceleration tests over a short distance is appropriate.

2) The 505 agility test measures the ability to change direction 180 degrees. A smaller degree turn test would probably be more appropriate for volleyball as most movements incorporate only a small change of direction. The ability to turn to both the left and right direction may be different and should also be assessed.

3) You may also want to do a volleyball specific agility test, which can incorporate movements around the court to simulate actual movements that might be encountered during games.

1) To test large groups of athletes at once, the maximum effort shuttle run (beep) test would be appropriate.

1) The sit and reach test can be done for lower back and hamstring flexibility. Other flexibility tests should also be performed that are relevant for the sport or playing position.

1) Skinfold measures should be performed to determine body fat levels.

For similar stories, check out our Fitness section.

How to Be a Better Volleyball Player