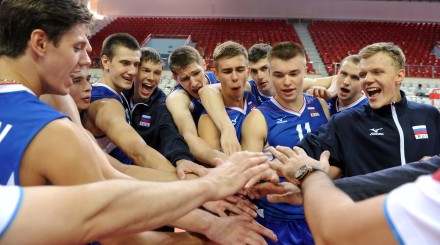 Russia improved their tournament’s record in two matches to 2-0, while France dropped to 2-1 in three matches.

Russia played a relaxed and trustable game after they succeeded to defeat Brazil in their thrilling match yesterday and keep the strategy of using the middle blockers Ivan Demakov and Ilyas Kurkaev in their defensive action beside their role in the quick attack.

After Russia won the first set, France tried to come back in the second set through improving their block and defence against the heavy Russian attacks, but again Russia changed the strategy using the wing spikers specially the opposite Victor Poletaev in position 2. Russia went easily to win the third set with the least effort they can after most of the French players lost their motivations.

Russia’s Poletaev was the match best scorer with 16 points including 3 killing blocks and 2 ace services. He was followed by the middle blocker Ivan Demakov who scored 12.

France captain Trevor Clevenot was his side best scorer with 15 points including 2 stuff blocks.

Santilli to replace Uriarte at helm of...