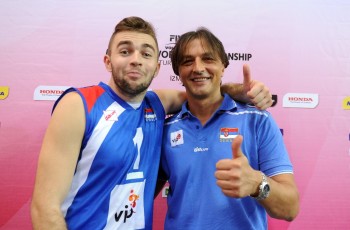 With the third victory in row the winners improved their competition record to 3-0, while suffering their first defeat, Canada dropped to 2-1.

Serbia’s outstanding weapon Uroš Kovačević played an important role in the victory, not only with his 23 points scored as the match best scorer, but also with his motivations sent to his colleagues specially when Canada led in the first set and also through the serving power he made scoring two aces. The other outside hitter Mihajlo Stanković was the second scorer with 16 points.

Canada’s Bradley Gunter, Stephen Maar and Ryley Barnes contributed 11 points each as their side scorers in the epic encounter.