Video Challenge System made its debut at the World Grand Prix Finals on Wednesday and the introduction of the video verification received very positive feedback from Maja Ognjenović and Hui Ruoqi, who were the first to call upon challenges during the match between Serbia and China. 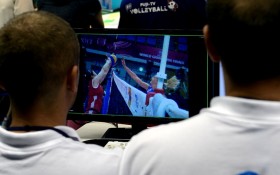 “We have very professional referees but they are human beings and sometimes human beings make mistakes and sometimes there are controversial calls so I think it’s a good thing for the sport,” said the Chinese captain Hui. “The Challenge System gives us a chance to fight for our rights.”

Captains from both sides can call upon a challenge during a match before the game has been resumed and directly after the rally which is a matter of doubt.

Fortunately, the first challenges of Ognjenović and Hui were both successful. “I think it was a good experience, for sure,” said Serbian captain Ognjenović. “Referees can sometimes make mistakes so if they are not sure I think it’s easier for them also.”

As for now, subjects for video verification can be only applied upon five situations, namely ball position where touching the floor, ball contact with antennae, faulty antennae or net contact by a player, contact of player’s feet with end line, attack line, and under net penetration into the opponent’s court, libero player’s feet position, while the block touch has not been included yet.

For more information about this competition, click on World Grand Prix 2013.

WoV Quiz: Do you want to be at EuroVolley Finals?