Serbian coach Zoran Terzić was surprised by the relatively easy win against Japan: “First, I want to congratulate my team because we played really well tonight. I really like to play in Japan, especially against Japan because every time it’s an amazing atmosphere and we always play a very good game. 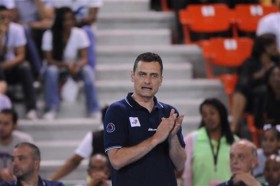 He added: “Tonight, it was a little bit easier than we expected. Japan started to make mistakes at the end of the first set and maybe made our job a little easier. But we played really well and we respected our opponents throughout the game”.

Serbian captain Maja Ognjenović: “To be honest, it was easier than we expected today. First, because Japan made a lot of mistakes and made it easier for us, but also we did a good job in defence and our block was good. Now we just want to concentrate on our next games and to keep playing well”.

Japan’s coach Masayoshi Manabe: “Serbia have tall players and they’re very powerful and they had a lot of side outs. Before the side outs, we failed on a lot of combinations, especially between the setters and spikers. As for China tomorrow, we know they are very strong, but we have to look at the problems within Japan first and need to make sure our combinations are working. Also, Japan’s previous good point was our defence but this hasn’t been working so well”.

See the WoV Community profiles of Serbia and Japan.

WCHJ M: Serbia back to winning ways against China