The female Supercopa 2013 will be held 19th October in Murillo de Rio Leza. The Royal Spanish Volleyball Federation will open the season in the Superliga and thath will be the first title of the season in Division de Honor 2013-2014. The volleyball teams Haro Rioja Voley and Embalajes Blanco Tramek Murillo will fight for the 12th edition of the Super Cup, a match with many attractions. 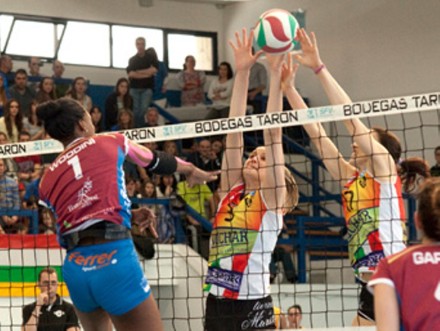 The event will be held Saturday, October 19, at 19.00, at the sport center  Federico García Lorca in the town Rioja Murillo de Rio Leza. The match that opens the 2013-2014 season at the SFV face the champions league and cup, Haro Rioja Volleyball against the league and Cup runner, Embalajes Blanco Tramek Murillo.

The two teams will meet in a rematch of last season’s final, a match of maximum rivalry between the two neighboring teams. Emotion and outstanding accounts between the two great masters of the past year will stage a party that promises equality and show.

The two squads already crossed paths in major crashes last season, in the title game of the Cup of HM the Queen 2013, held at the sports the Ferial de Haro, ended with the triumph of the squad coached by Jose Miguel Perez 3-1

Later, in the final league playoff, again found the archrival La Rioja, Rioja Haro with volleyball title after paying off the final series with three wins and one defeat. Much at stake therefore bring this Supercopa 2013, an event that also will be the chance to see in action the two sets rejuvenated candidates all season titles.

The latest edition of the Super Cup was held in Haro and crowned Jarrera squad, who won 3-0 Valeriano Alles Menorca. In this way, the city of Murillo de Rio Leza wear their best clothes to welcome the exciting first title the new campaign in the SFV.

The excitement will take place in the sport center Federico García Lorca, Saturday October 19 at 19.00.