As it turns out, you do not have to play Volleyball to be one of the stars of the 2013 CEV VELUX European Championship – Men, Final Round in Poland and Denmark. You can become one IF you are at the right time at the... not-so-right place. 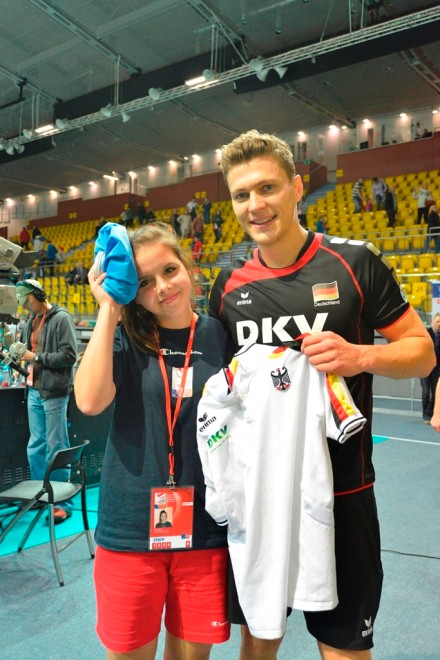 Wiktoria is one of the volunteers in Gdynia, she works on the court to keep it clean and safe for the athletes to play. During the third set of Sunday’s match between Germany and the Czech Republic, the play was very competitive and required a lot of effort in defense on both sides.

Wiktoria, sitting right by the jury table, was exactly were the German setter Lukas Kampa had to be to reach the ball flying off the court. “I saw him running straight at me and I thought ‘Oh my God’,” said Wiktoria touching the side of her forehead. Under her fingers you could see a small purple bump. “I dodged, and thank goodness I did, because I would have had a huge bruise right in the middle of my forehead,” she added laughing.

Thankfully, nothing really serious happened. The Germans actually won that point. Kampa went straight to Wiktoria to see if she was all right; the same thing did his coach, Vital Heynen. She was only in a slight shock, but grinning from ear to ear.

She received a round of applause from the audience and a hug from the player himself. “I’ve always wanted such T-shirt,” she joked after Kampa gave her his shirt as a gift and took many photos with the girl.