The Dominican Republic Women’s U23 National Team has returned to Baja California for a Training Camp before the Age Group World Championship starts. 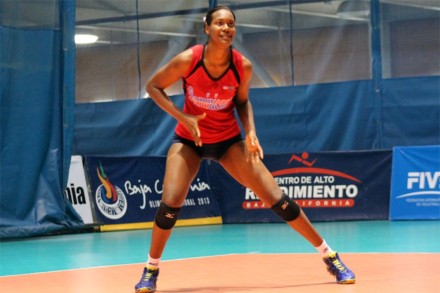 The team coached by Brazilian Marcos Kwiek has a mixture of youth and experience after most of this players participated at the Norceca Women’s Continental Championship, celebrated in Nebraska, United States, just a few days ago.

The Dominicans finished second at this competition that was played in the Senior Category only behind hosts USA, coached by Olympian and multi-medal winner Karch Kiraly.

But now it is time to go on for the Dominican squad that arrived on Friday in the High Performance Center to become the first foreign team in Tijuana for the World Championship Open, scheduled from October 5th to the 12th, while the 13th is the day for departure.

The Dominicans had a fitness session on Friday and their first formal on court practice on Saturday Playing and training in Baja California is nothing new for the Dominican squad and many of these players who even made history when they won the silver medal in 2009, when the city of Mexicali hosted the FIVB Women’s U20 World Championship.

The Caribbean squad was coached by Wagner Pacheco, also a Brazilian, who serves as Kwiek’s assistant for this championship. The 2009 Dominican team was a big surprise after beating top favorite Brazil in the semifinal, while Germany conquered the gold medal.

However, Dominican Republic entered in the Age Group World Elite and also began a new hegemony in the North, Central and Caribbean region along with Cuba and the United States.

The roster presented by Dominican Republic for this training camp is composed of players like libero Brenda Castillo, Candida Arias Pérez, Yonkaira Pena and Lisvel Eve Mejia, also known as “china” (Chinese) who is recovering from a severe injury suffered in Peru by the beginning of the year.

Marianne Fersona as well as Ana Yorkira Binet, Jeocelyna Rodriguez, Camil Dominguez and Gailac Gonzalez are also on the roster. But there is also chance for the youngest girls who have traveled again to a center that also could be their second home after the “Juan Pablo Duarte” Olympic Center in Santo Domingo.

Celenia Toribio, Pamela Soriano, Brayelin and Jineiry Martinez as well as Erasma Moreno are part of the new generation of players that have participated at the International Level.

In the position of libero Dominican Republic has its best and most solid weapon with Brenda Castillo, the most awarded athlete of the island, but also the Dominican federation has worked hard in developing Winnifer Fernandez, as another solid option and great backup for Castillo.

Coach Kwiek has become familiar about training in Baja California, as well as Pacheco and his second assistant, Wilson Sánchez. The team manager is Christian Cruz, while Ruben Andisin is the physical therapist and Yeivic Jimenez is in charge of statistics.

To read more news from this competition click on World Championship U23 W 2013.