SVS Post lived up to expectations and qualified for the final of this season's Middle European League. In the first match of the Final Four tournament at the Multiversum hall in Schwechat the home team defeated its opponent Slavia Bratislava at 3:0 (25:22, 25:20, 25:18) in only 72 minutes. 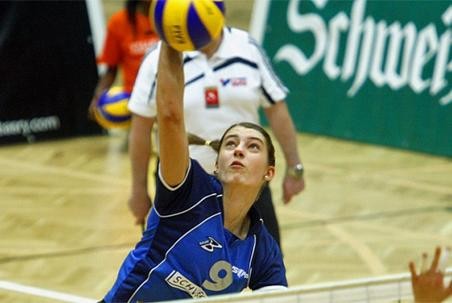 With 16 points Radosava was the best scorer of the Austrians.

“It was not an easy encounter because the pressure to reach the final was high. Bratislava showed a good defense but eventually we deserved to move on to the final”, said a relieved Darko Antunovic, sports director of SVS Post.

The home team’s captain Conny Rimser stated: “We were looking forward to this encounter – the victory is well-earned. Now we will see who will be our opponents in the final.”

In the second encounter of today Branik Maribor qualified for the upcoming final. The girls from Slovenia kept the upper hand in the duel against VK Doprastav Bratislava securing the victory at 3:1 (25:12, 25:18, 23:25, 25:20).

Only in the third set the Slovenians lost their concentration for a little while but in the following set they acted as poised as in the first two.

In the qualification round Maribor was one of two teams who were able to defeat SVS Post thus the assistant coach of SVS Post Peter Gartmayer is not over-optimistic: “It will be interesting. Maribor brought their best players to this tournament. It will be a very tight encounter.”

He also adds: “If both teams can play at their full potential, I think we have a slight advantage.”

The final will take place tomorrow at 8:15 pm. The match for third place is scheduled at 5:30 pm.