Helsinki, Finland, March 8, 2012. A total of 719 teams have already registered for yet another memorable edition of the Power Cup, Finland’s mass Volleyball tournament which is slated for next June 7-10 in the harbor city of Turku. 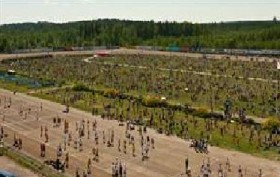 Once again thousands of kids will be playing Volleyball outdoor after the very successful outcome of last year’s tournament in Lahti that was joined by 847 teams.

So far only 14 sides have registered from abroad but the local organizers expect this figure to significantly move up as the deadline for the registration is set for next May 4.

The venue of the event will be the Kupittaa outdoor sports area which is located right in downtown Turku.

Some 300 Volleyball courts will be set up there to host more than 5’000 matches across the four days of the competition under – hopefully – clear and blue skies.

There will be a great opening ceremony, disco music for the kids and a friendly match where Finland’s women’s national team will play an opponent still to be determined.

“We are very proud that as per the current figures we will have an increase of the players aged from 7 to 11 in comparison with last year’s edition in Lahti. This is a good sign as many of these kids have just started playing Volleyball” stresses the Project Manager of the Power Cup, Mrs. Päivi Harri.