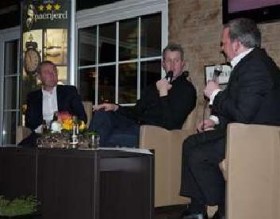 Noliko and KRC GENK have been participating in their respective Champions League this season while Heynen and Denier are both former players who have been connected with their clubs for 27 and 38 years respectively!

As they both have excellent communication skills, they were able to draw the audience in from the very start of their debate as they compared the state of volleyball and football by addressing also some “sensitive” items such as players’ salaries, misbehavior etc.

They also dedicated some time to discuss other topics such as how to deal with stars and generally how to motivate players.

This debate was only a first attempt and after such a positive outcome plans are unfolding to have such an open evening four times a year.