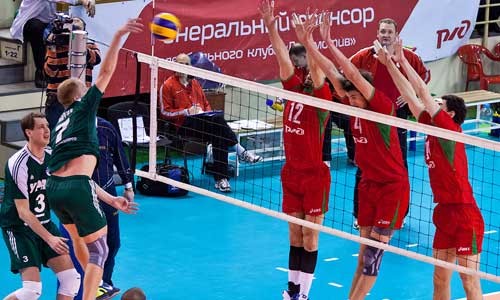 The most exciting game was expected to be in Novosibirsk. Although home team Lokomotiv has finished the regular season way ahead of Ural Ufa, it was unclear how Novosibirsk would react to disappointing defeat in Champions League and over the top hostileness in Izmir’s arena that the team has experienced in Turkey.

Also we had in mind that it’s playoff time and we kind of expect some magic from old fox Ufa’s setter Lloy Ball, as over the years he always manages to outsmart everyone when it really matters.

Straight from the start it became clear that Ufa will be hard to beat. With great work on service, attack and block visitors easily took the first set.

In the second set it was Lokomotiv’s turn to take advantage, the main spiking force of the team Cuban opposite Michael Sanchez was efficient as ever, leading his team to convincing 25-16 win. It was that kind of game when you almost expect another change at the start of new set.

And Ural dominated the most of the 3rd set, eventually winning it 25-23. But it was really fair to the public and players that this battle went on to the fifth set as home team took the fourth by 25 points to 22.

Filled with emotions and nerves from both sides equal fifth set went to 12-12 balance when, unfortunately, judges made a mistake, that went on to be probably crucial. They didn’t count Ural’s killing block, making teams replay the point.

Ural players spent way too much energy disputing this call and their loss of concentration was enevitable. In the end Lokomotiv Novosibirsk prevailed by 16-14 but Ural Ufa proved that this series is anything but decided.