Studenti TIRANA claimed Albania men’s national league after finishing the Championship series with Teuta DURRES by taking the fifth and deciding game at the tie-break (20-25, 25-22, 22-25, 25-21, and 15-10). The last game was played at “Asllan Rusi” sports hall in Albania’s capital city with more than 2’000 fans in attendance ending in a home triumph for the guys mentored by head coach Ylli Tomorri who got their revenge after losing last year’s final to Teuta. 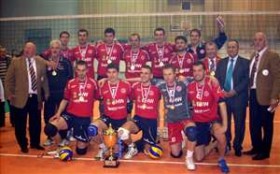 The Championship series had started favorably for the defending champions of Teuta who had claimed the first and third game, but Studenti was able to storm back twice to call for a fifth showdown. This was actually the ninth time this year – by combining regular season and Playoffs – these sides were crossing their ways and after they had regularly lost all of their respective home matches Studenti stopped this negative streak on Monday to the delight of a massive crowd.

Teuta was very close to retain the title but eventually ran out of fuel in the tie-break while Studenti showed great focus, determination and maturity in scoring the last and deciding points.

“We displayed our character and we played like real champions shall do; we really deserve this title because my players believed in their chances to go for that much wanted victory more than our rivals did” proudly commented head coach Ylli Tomorri after the game.

The real standout of the day was Studenti’s captain, 37-year old Elton Tukseferi who took his friends by the hand especially down the final stretch to this memorable win. Studenti TIRANA and Teuta may play each other once again this weekend when it comes to the semifinal stage of the national cup.

The Championship series of the women’s national league starring Minatori and UMB Volley is set to start tomorrow after Minatori edged Teuta in the semifinals with a double 3:1 while UMB Volley stormed back to claim a couple of wins (3:0 and 3:1) after losing in straight sets the opening match to Tirana TIRANA. This will be the first final in history where these sides will be battling for Albania’s national crown.