Puerto Rico and Canada booked their places in the semifinals of the NORCECA Women’s Continental Olympic Qualification Tournament after beating Costa Rica and Mexico respectively in the quarterfinals in Tijuana, Mexico on Wednesday. 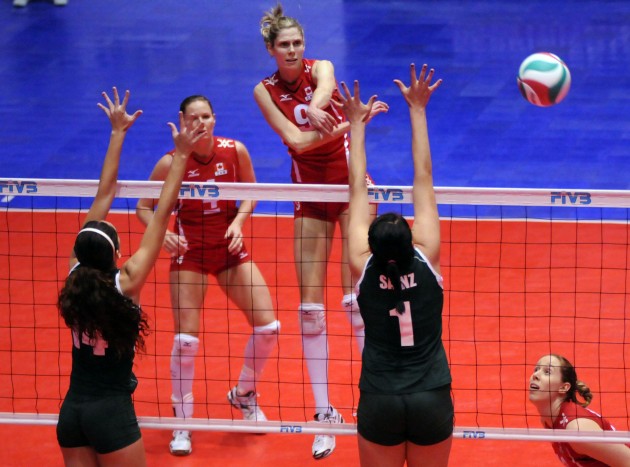 Puerto Rico will now face Cuba while Dominican Republic meet Canada for a spot in the finals. In the elimination for the 5-8 positions, Honduras take on Costa Rica and Trinidad and Tobago face Mexico.

Thursday is a rest day for all teams.

Three teams from Pool A –Dominican Republic, Puerto Rico and Canada – qualified for the final-four round so the match between the highest and lowest ranking of those sides in the preliminary phase must be repeated according to regulations.

“It is really refreshing to be on the winning track again after last night’s loss against the Dominican Republic,” Puerto Rico’s Vilmarie Mojica said. “It was a team effort and now we have to work on reducing the errors for our next match.”

“My team played well and were disciplined today,” Canada coach Arnd Ludwig said. “We were concerned about this match because in the NORCECA tournament we had lost to Mexico. Now we have to rest and prepare against Dominican Republic.”

Puerto Rico set up a semifinal clash with Cuba after outclassing Costa Rica in straight sets (25-12, 25-12, 25-9) on at the Tijuana Multi-Sports Gymnasium. Puerto Rico coach David Aleman used all his players with the exception of middle blocker Jetzabel Del Valle en route to an easy victory in just one hour.

The gap between the two teams was especially wide in the aces department with the winners scoring 13 aces against only three from the losers. Puerto Rico also out-blocked their opponents 8-4. Sarai Alvarez and Yarimar Rosa were the two best scorers for Puerto Rico with 15 and 11 points respectively. Stephanie Enright and Shanon Torregrosa each added eight points.

Canada downed Mexico in straight sets (25-17, 25-18, 25-18) to reach the semifinal phase where they will face world No. 9 Dominican Republic on Friday. It was a well fought match but the taller Canadians capitalized on their size to out-block their opponents 8-3. Both teams served two aces and made the same total of errors with 18.

The Mexicans battled point-by-point with good defence but struggled to stop Canada’s prolific point-producer Sarah Pavan. The left-handed Pavan led all scorers with 21 points, all via attacks, while Marisa Field and Tammy Mahon added eight and seven respectively. Claudia Rios was the best scorer for Mexico with 12 points.