Long Beach, California, May 7, 2012 – Canada, Mexico, Cuba and USA all earned straight set victories on the first day of the NORCECA Men’s Continental Olympic Qualification Tournament which began in Long Beach, California on Tuesday. The winner of the eight-team tournament, which will continue until Saturday, will book their place at the 12-team London 2012 Olympic Games. 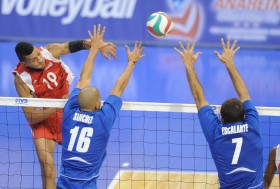 World No.5 Cuba handed Puerto Rico a straight-sets (25-20, 25-18, 25-18) defeat to begin their campaign on a high. Cuba’s Wilfredo Leon and Rolando Cepeda contributed 13 points in the victory, while Fernando Hernandez added 12 points. Puerto Rico was led by Juan Figueroa’s 11 points.

Cuba dominated at the net with a 14-4 block advantage and limited its errors to 11.

“We have a young team and at the beginning of the tournament they are a little nervous,” Cuba coach Orlando Samuels Blackwood said. “Puerto Rico is missing some very important players. I think both teams could have played better tonight.”

USA converted 33 of 49 attacks into points for a 67.3 per cent spike success rate in addition to a 12-0 margin in service aces. Rich Lambourne produced 11 of the USA’s 20 digs in the match.

Canada held an 8-3 margin in blocks and took advantage of 19 Dominican Republic errors in the match. Canada converted 49 of its 76 attacks into points.

Mexico finished the day off with a strong 3-0 (25-16, 25-18, 25-20) win over Costa Rica as Daniel Vargas scored a match-high 17 points, including six aces. Richard Smith Hall topped the scores for Costa Rica with six.

Mexico scored 17 aces and held a 35-16 successful attack advantage in the three-set victory. Costa Rica committed 33 errors in the match to Mexico’s 18.

Day two will see Mexico face Trinidad & Tobago and United States take on Costa Rica in Pool A while Cuba clash with Dominican Republic and Canada takes on Puerto Rico in Pool B.