Sofia, Bulgaria, May 8, 2012 – The home heroes of Bulgaria, Germany and Italy all claimed their respective opening matches at the European Olympic qualification tournament that started on Tuesday in Sofia. While the hosts and Germany downed their respective opponents – Slovenia and Slovakia – in straight sets, Italy was close to lose to a very motivated Finnish side that even missed a match ball in the tie-break before the “Azzurri” finished it off with a couple of kill blocks. 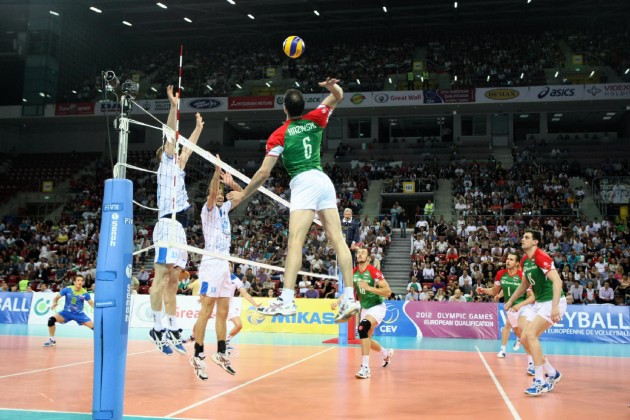 Bulgaria made on Tuesday a successful start of its home-ground campaign at the 2012 Olympic Games – European Qualification for men in Sofia. Inspired by their enthusiastic fans on the stands of Arena Armeec hall, they shut out Slovenia 3:0 (25-23, 25-18, 25-22), but had to cope with the courageous performance of their opponents.

Bulgarian star Matey Kaziyski was the best scorer of the match with 15 points while Tine Urnaut and Mitja Gasparini scored 13 and 12 respectively for Slovenia.

“We knew that we were facing a very good team, one of the favorites in the tournament. We started the game well, but we were too nervous and made too many mistakes. We missed a good opportunity to close the first set and did not let ourselves back into the game,” Slovenian captain Tine Urnaut said.

“We followed our technical plan, but we made a lot of mistakes attacking and serving,” Slovenia’s head coach Veselin Vukovic agreed. “I would like to remind you that we landed in Sofia without many of our key players and our problems in the middle blocker’s position were obvious tonight. Bulgaria deserved the win.”

“It was very important to start this tournament with a win and to get rid of the nervousness and the pressure on the team,” Vladimir Nikolov, captain of Bulgaria, stated. “Another problem came from the last minute injury of our setter Andrey Zhekov. Fortunately, we showed character and fought for every ball from the beginning until the very end.”

Bulgaria’s mentor Radostin Stoytchev commented: “It was a very complicated game for Bulgaria in terms of the pressure and the unexpected injuries of some of our main players. The most decisive moment came after the second technical time-out of the first set, when we fought to take the lead and never looked back.”

Germany made a flying start in Sofia to open the program of that Olympic qualifier. Vital Heynen’s official debut as Germany’s head coach was successful as his team shut out Slovakia 3:0 (25-19, 25-22, 25-20) on day 1 of Pool II play at Arena Armeec.
Gyorgy Grozer topped the scorers’ chart of this fixture, as he piled up a total of 17 points in the three sets. Substitute opposite of Slovakia Peter Michalovic was most prolific among his teammates with 11 points.

“We started the match very badly,” a disappointed Michal Masny, captain of Slovakia, stated. “We made a lot of mistakes and although we were trying to fight, it was very difficult to play against Germany as equals. Our serving was easy and did not help us at all.”

Quite opposite was the mood of his German counterpart Björn Andrae: “I am happy that we won the first game of the tournament. We were concentrated on the court and very good at reception. We all hope to continue the same way.”

“Slovakia’s main problem in this match was the low effectiveness in offense and serving,” Stefan Chrtiansky, head coach of Slovakia, explained. “I think the team was nervous, but if we want to be better next time, we must improve not only mentally, but also technically.”

Germany’s mentor Vital Heynen also thinks his team needs to improve: “Our good reception was the key to the win today. We are happy with the result, but we realize that we must play better in order to successfully continue our campaign”.

Italy and Finland played a spectacular five-setter on the opening day of the 2012 Olympic Games – European Qualification for men at Arena Armeec. The “Suomis” were close to creating the first major upset of the tournament, but eventually Italy prevailed and won by 3-2 (25-21, 16-25, 30-28, 16-25, 16-14). Michal Lasko charted 24 points to become the top scorer of the match. Olli Kunnari scored the most points for Finland – 19, as teammate Mikko Oivanen added 18 and twin brother Matti another 16.

“Finland definitely had to win this game,” in captain Tuomas Sammelvuo’s opinion. “It was completely in our hands, but in some moments we were too much in a hurry to close it. Anyway, we must proceed with this way of playing and use the same serve that got Italy into so much trouble.”

Italian counterpart Cristian Savani seemed to agree: “We must be very happy for that win, because Italy was far from its full potential today. Our first match happened to be so important and we got the maximum from it.”

“I am not surprised by the ups and downs in the play of both teams today,” Daniel Castellani, head coach of Finland, stated. ”We did not have any time to prepare and this is normal. Finland had a great match, so we must forget about the result as soon as possible. The opportunities are still open”.

Italian mentor Mauro Berruto added: “Finland played much smarter than us and, to be honest, they deserved to be the winners today. We were lucky enough to get the big points in the game. Actually, there was only one player, who did his job well on the field, I expect much more from the others.”