Germany made a flying start at the 2012 Olympic Games - European Qualification for men. Vital Heynen’s official debut as Germany’s head coach was successful as his team shut out Slovakia 3:0 (25-19, 25-22, 25-20) on day 1 of Pool II play at Arena Armeec competition hall in Sofia. 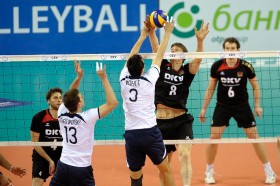 The first rallies of the first set were the only time in the match where Slovakia was a little ahead on the score board. After 3-3 Germany took control of the game and never let go. The two teams made a cautious start of the match and both made too many unforced errors. However, Germany’s offense, masterfully led by setter Simon Tischer and powered by opposite György Grozer, gradually started to give coach Heynen’s team the edge it needed to subordinate Slovakia in this match. Germany’s blocking, reception and serving were also superior to those of Slovakia in this game.

Grozer topped the scorers’ chart of this fixture, as he piled up a total of 17 points in the three sets. Substitute opposite of Slovakia Peter Michalovic was most prolific among his teammates with 11 points.

“We started the match very badly,” a disappointed Michal Masny, captain of Slovakia, stated.  ”We made a lot of mistakes and although we were trying to fight, it was very difficult to play against Germany as equals. Our serving was easy and did not help us at all.”  Quite opposite was the mood of his German counterpart Björn Andrae:  “I am happy that we won the first game of the tournament. We were concentrated on the court and very good at reception. We all hope to continue the same way.”

“Slovakia’s main problem in this match was the low effectiveness in offense and serving,” Stefan Chrtiansky, head coach of Slovakia, explained.  ”I think the team was nervous, but if we want to be better next time, we must improve not only mentally, but also technically.”
Germany’s mentor Vital Heynen also thinks his team needs to improve: “Our good reception was the key to the win today. We are happy with the result, but we realize that we must play better in order to successfully continue our campaign”.