Italy and Finland played a spectacular five-setter on the opening day of the 2012 Olympic Games - European Qualification for men at Arena Armeec competition hall in Sofia. The "Suomis" were close to creating the first major upset of the tournament, but eventually Italy prevailed and won by 3-2 (25-21, 16-25, 30-28, 16-25, 16-14). 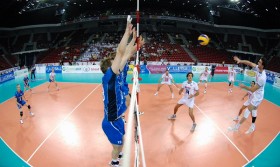 Finland started the match very strong and surprised the opponents with good reception and efficient offense. The players from the North took the lead, but were able to maintain it only through 11-10. The Italians took advantage of Michal Lasko’s great spiking and also of Finland’s mistakes and flipped the score in their favor. They were able to stay on top through the end of the set and won by 25-21.

Inspired by its numerous enthusiastic fans on the stands, Finland took the initiative after it was down 1-3 and was able to dominate through the end the second set.  Olli Kunnari and Mikko Oivanen stepped up their efforts in offense, the number of errors their team made was significantly reduced, and with some great performance from the serving line the Finns were able to close the set at an impressive 25-16.

Italy came back into the third set with an important change in its lineup as Cristian Savani was now part of the starting seven as an opposite. But it was once again Michal Lasko taking the major load of the Italian offense. Mauro Berruto’s players accumulated an 18-10 lead and they seemed to be cruising towards a victory in this set, but their opponents had no intention of giving up.  The Finns gradually fought back, not only to even the score, but also to gain the first set-point at 24-23. The battle on the court continued for every point and eventually Italy prevailed to win the set at 30-28.

But Finland was already on a roll. It quickly recovered from a 2-4 in the fourth set to establish domination through the rest of the set. Setter Mikko Esko was doing a great job spreading out his team’s attacks and Finland once again hammered out a remarkable 25-16 win.

Finland’s domination spilled over into the tie-break and it quickly rushed to an 8-4 advantage at the side-switch. As the Finns stayed on top through 11-8 everything seemed set for the first major upset of the tournament.  However, the Italians fought back with three consecutive points to tie the score at 11 each.  Then they saved Finland’s first match-point at 14-13 and with two kill blocks in a row for 16-14 emerged as winners.

Michal Lasko charted 24 points to become the top scorer of the match.  Olli Kunnari scored the most points for Finland – 19, as teammate Mikko Oivanen added 18 and twin brother Matti Oivanen – another 16.

”Finland definitely had to win this game,” in captain Tuomas Sammelvuo’s opinion.  ”It was completely in our hands, but in some moments we were too much in a hurry to close it.  Anyway, we must proceed with this way of playing and use the same serve that got Italy into so much trouble.”  Italian counterpart Cristian Savani seemed to agree:  “We must be very happy for that win, because Italy was far from its full potential today. Our first match happened to be so important and we got the maximum from it.”

“I am not surprised by the ups and downs in the play of both teams today,” Daniel Castellani, head coach of Finland, stated.  ”We did not have any time to prepare and this is normal. Finland had a great match, so we must forget about the result as soon as possible.  The opportunities are still open”.  Italian mentor Mauro Berruto added:  “Finland played much smarter than us and, to be honest, they deserved to be the winners today.  We were lucky enough to get the big points in the game. Actually, there was only one player, who did his job well on the field, I expect much more from the others.”