Latvia women’s national team celebrated a memorable comeback to the international scene this afternoon at “Olympic Sports Centre” in Riga by hammering out a 3:0 win (25-17, 25-23, 25-13) to down Cyprus in the first of two matches scheduled for the opening round of the 2013 CEV Volleyball European Championship. 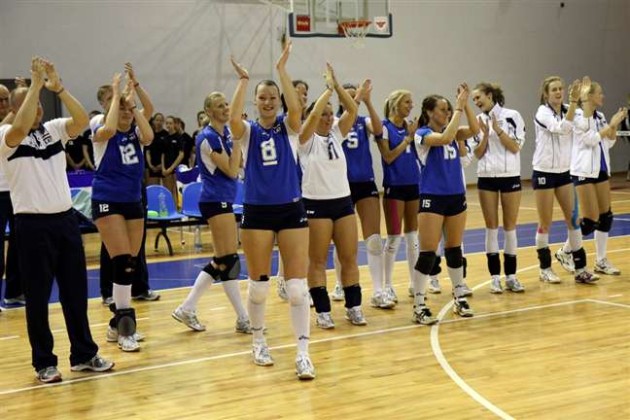 The game was attended by some 800 fans who were extremely pleased with the performance of the home heroines whose last participation in the CEV European Championship dated back to the 2006/2007 edition. The return match is scheduled for May 20 in Limassol, Cyprus.

Latvia’s setter Sana Catlaksa and Cyprus opposite Irina Koudouna were awarded best players of this first round, with special prizes provided by Asics, the official sportswear supplier of the Latvian Volleyball Federation. Viktorija Brice paced Latvia with 20 points well supported by Sandra Breiksa who added 12 more to the account of the home side, while Koudouna finished the game as Cyprus most prolific player with 12 points as well.

Latvian head coach Janis Leitis was more than satisfied with the result and the performance delivered by his players: “The opening of the match was a little shaky, especially as the young players looked afraid and nervous, but our setter Sana Catlaksa did a great job as she anchored the group with her experience and charisma, thereby cooling her mates down. In the second set I even opted for a substitution and our reserve player Kristine Lece did a great job in defense. We have to start immediately our preparations for the return match in Cyprus and I hope we can play our best there as well”.

His Cypriot counterpart Emmanouil Roumeliotis was not happy at all but still felt this match was a good experience for his young players: “Latvia deservedly won this match as my girls did not play that good this afternoon. We should have taken the second set but in the final rush we made way too many mistakes and this resulted into the final 25-23 for our opponents. However, there is still one more game left and so we’ll do our best to advance to the next round”.