Serbia outmuscled Cuba in straight sets (25-21, 25-23, 25-19) on the fourth day of action in the FIVB Women's World Olympic Qualifying Tournament at Tokyo Metropolitan Gym on Wednesday. 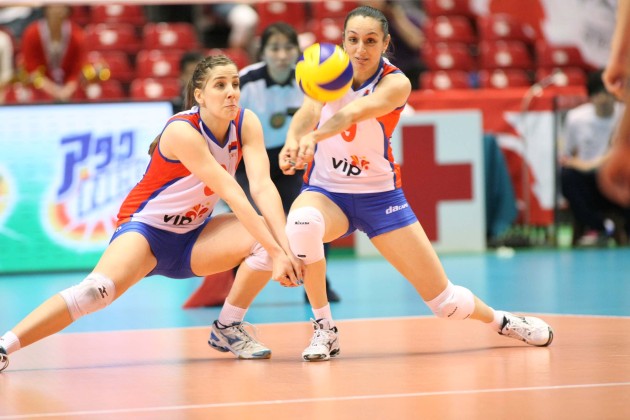 The victory raised Serbia‘s record to 3-1, while Cuba dropped to 1-3 with the loss. The European champions held a 7-2 advantage in aces and edged their opponents 7-6 in blocks.

Stefana Veljkovic and Natasa Krsmanovic paced a balanced attack for Serbia with 11 points each. Rosanna Giel scored a match-high 15 points and Wilma Salas added 10 in the loss for Cuba.

The contest was a showcase of power vs. power, as both sides slammed spike after spike, with Serbia able to string together longer runs of points. Cuba was impressive in spurts, but could not sustain it and made some untimely unforced errors.

Cuba took a 5-4 lead in the opening set on a spike by Giel. Serbia was up 8-5 at the first TTO following a block by Maja Ognjenovic. Serbia led 10-7 afer a nice spike by Brakocevic off an option play. Cuba pulled within 11-10 after a soaring spike by Giel. Leanny Castaneda whiffed on a spike at the end of a long rally and Serbia went up 13-11. Serbia was on top 16-14 at the second TTO. A nice dink by Tijana Malesevic made it 18-15. Yusidey Silie‘s spike made it 20-17. With Serbia leading 22-18, Cuba called a timeout. Salas sailed a spike long and Serbia was within two points of the set at 23-18. Serbia took the set 25-21 on a spike.

Stefana Veljkovic notched five points in the set for Serbia. Giel and Castandeda had four each for Cuba. Serbia jumped to a 5-2 lead in the second set after a block by Veljkovic. Silie served into the net and Serbia was on top 8-5 at the first TTO. Down by five points at 10-5, Cuba called a timeout. A Veljkovic spike boosted Serbia’s lead to 13-7 as Cuba was clearly having trouble in defense. Santos missed a spike and Serbia led 15-10. A quick dink by Ognjenovic made it 16-10 at the second TTO. Brakocevic fired a spike long and Cuba was within three at 16-13. A spike by Salas made it 17-15 and Serbia took a timeout. Salas fired a spike wide giving Serbia a 20-17 lead. Cuba drew within 21-20 on a spike by Palacios, before Veljkovic answered with one of her own. The sides seemingly exchanged spikes down the stretch of the set. It was power against power. Giel made a service error to give Serbia set point at 24-22 and Natasa Krsmanovic rose for a spike to end it at 25-23.

A reception error by Malesevic gave Cuba a 5-3 lead in the third set. Serbia tied it 6-6 on a fine block by Ognjenovic. A soft spike by Malesevic put Serbia up 8-7 at the first TTO. Brakocevic‘s spike made it 12-10 for Serbia and then Palacios commited a reception error. Serbia was in front 16-12 at the second TTO. Veljkovic‘s spike made it 20-15 for Serbia as Cuba tried to stay in the match. With a 21-18 advantage, Serbia called a timeout. A crosscourt spike by Vesovic put Serbia within two points of victory at 23-18. Serbia closed it out 25-19 on a one more spike by Vesovic.

NORCECA U20 W: Favorites too strong