Serbia completed a clean sweep of their matches for the first round of the 2012 CEV Volleyball European League – Women as the home heroines edged Romania 3:1 (27-25, 25-16, 22-25, and 25-15) after 104 minutes of play in front of 2’900 fans at “Dudova Suma” sports hall in Subotica. A total of 8’600 fans found their way to the hall this weekend thereby breaking all previous records of attendance in this competition. 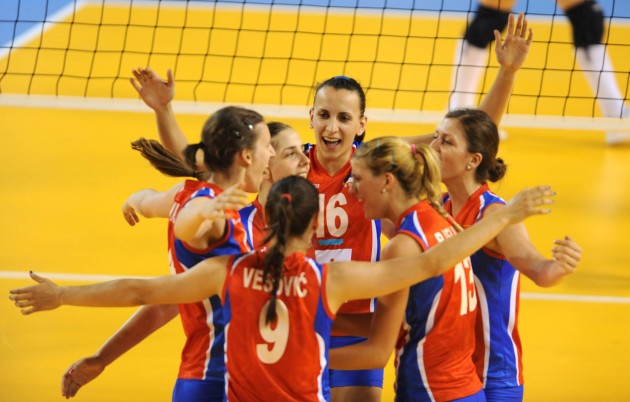 Actually the match did not start that well for the winners of the past three editions, as they trailed 15:22 as Romania got really close to seize the opening set. However, helped by their passionate supporters, the local favorites stormed back after Zivkovic and Bjelica had replaced Radenkovic and Starovic, scoring a 7:1 break that flipped the charts around and re-opened the fate of that set. Serbia was able to resist to two set balls for Romania and eventually used its first opportunity to move up 1:0.

Things did not get any better for Serbia also in the opening phases of the second set where they trailed 5:8 before they got back on track as Nadja Ninkovic was standing behind the serving line (11:11). Serbia broke away right by the second technical time-out (16:12), went up 24:16 and with Bjelica and team captain Milena Rasic on fire, the hosts could eventually go for the provisional 2:0.

Serbia set the pace of the match also by the first technical time-out of set 3 (8:6) but afterwards Romania scored 8 consecutive points to move up 18:10; Serbia clawed back again with a 7:0 break but this time it did not work out with a comeback as Romania deservedly pocketed the final 25-22.

The home side did not really stand out in set 4 making once again many mistakes but Romania did not exploit the opportunity given by the hosts who regrouped – especially in defense – to restore their leadership in the score (18:13, 21:14), claim 9 match balls and silver the first one to clip their third win in the competition.

“We underestimated the Romanian players and this did cost us a set. It was not a good game from our side as we made many mistakes but we were lucky enough to claim the victory. We will be going to Poland to play in the first leg of the FIVB World Grand Prix and there we will have to play much better than we did here” said Serbian team captain Milena Rasic.

“We did not have any special expectation from this game, so we decided to go and fight to make their task as difficult as possible. Our main goal was to play good and I think we succeeded in this. We are improving match after match and hope we can maintain that positive trend” said Nneka Onyejekwe, the team captain of Romania.