Japan posted a straight sets (25-22, 25-23, 25-12) victory over Australia on the fifth day of action in the FIVB Men's World Olympic Qualifying Tournament at Tokyo Metropolitan Gymnaium on Thursday. 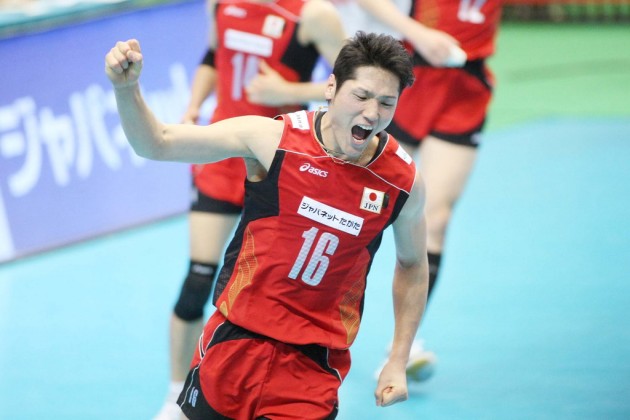 The result left both sides with records of 3-2.

Tatsuya Fukuzawa and Kota Yamamura powered a relentless Japan attack with 15 points each.

Igor Yudin led Australia with 14 points. Edgar Thomas had 12 in the loss.

Japan seized the momentum in the first set and retained it throughout the match. They were proficient on both offense and defense in the impressive triumph. Japan served especially well on the way to the win.

Australia had trouble with Japan‘s quick attack and service reception. They made several unforced errors during the match and seemed rattled by the raucous sellout crowd.

Shimizu fired a spike into the net as Australia moved out to a 5-3 lead in the first set. A spike by Fukuzawa moved Japan in front 6-5. Kota Yamamura‘s spike gave Japan an 8-7 lead at the first TTO. A quick flip by Yamamura made it 10-9 for Japan. Yusuke Ishijima sent a spike long and Australia tied it 13-13. Fukuzawa‘s spike took it to 15-14 for Japan. Yamamura’s spike put Japan up 16-14 at the first TTO. Adam White‘s spike leveled it at 19-19. Shimizu put Japan back on top 20-19 with a spike. Igor Yudin‘s spike pulled Australia within a point at 22-21. Another Fukuzawa spike gave Japan set point at 24-22. Yamamura‘s block gave Japan the set 25-22. Fukuzawa had eight points in the set.

Shimizu pounded a spike as Japan established a 5-2 lead in the third set. Yamamura‘s block gave Japan an 8-5 at the first TTO. Aiden Zingel served into the net and Japan was up 10-6. Fukuzawa‘s serve just made it over the net for an ace and it was 14-6 with Japan in total control. Another block put Japan up by 10 at 16-6 at the second TTO. Ishijima ripped another spike and Japan led 20-9. Thomas sent a spike long and Japan was two points from the match at 23-10. Yamamura blocked one more and it was match point for Japan at 24-10. Japan took the match 25-12 on a foot fault by Yudin.

Japan will take on Puerto Rico on Saturday, while Australia will meet Korea.

ECH W: Netherlands in next round, Spain...