Two Volleyball players from Northern Ireland were among the hundreds who carried the Olympic Flame in this week’s Torch relay which will light the Olympic and Paralympic Games this summer in London. 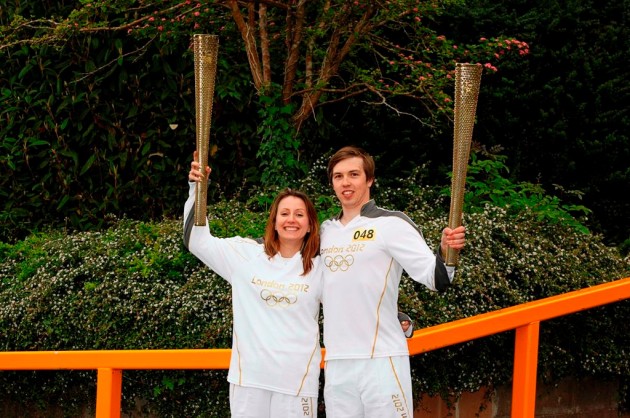 Alan McKnight is an accomplished club and representative player but also coaches the University of Ulster Coleraine women’s team and serves as Honorary Treasurer for the Federation. “It was a great privilege and a fantastic experience! It feels so good to see so many people supporting their communities and the Olympics!” he said.

Irena Mihneva is the Bulgarian born head-coach of the Northern Ireland women’s program as well as her club Queen’s University Belfast who retained the League and Cup championships for another season in Northern Ireland. Irena is also hoping to retain her Beach Queen title she won last season with QUB club mate Joanna Wiesowska. She has been living in Ireland for the past ten years and has been Vice President of the Federation (NIVA) for the past year. “It was an extraordinary moment I will always remember. I felt like a small part of the Olympics. It was amazing to be supported by all the crowds on the streets of Northern Ireland”.

Their selection to participate in the Olympic Torch relay reflects well on each player, their families, friends and clubs and Northern Ireland Volleyball as a whole.