Great Britain middle blocker Chris Lamont believes Belgium will provide his team with the ideal Olympic preparation in the three-match challenge series at the University of Edinburgh Pleasance from June 12-16. 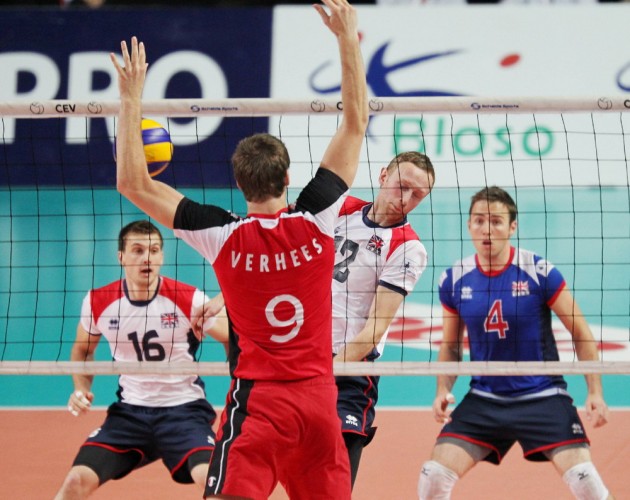 The 29-year-old middle-blocker knows the Belgian team as well as anyone in the GB squad, having played for two years with Prefaxis MENEN in the Belgian league. Lamont, who started out with Glasgow Ragazzi in the Scottish League, is one of only two Scots in the GB Olympic squad (the other being Mark McGivern) and is wary that Belgium will stretch the home team to the limits.
“We played Belgium six times throughout last summer. I know their players and coach really well and the matches between us are always close and they are going to be exciting matches in Edinburgh and ideal preparation for the Olympics” he states. “On paper, Belgium should beat us nine times out of ten because they have great players in good teams all over Europe and now have three players in Italy. But we have been training hard and worked well together for the past few years and it’s to our advantage that the matches are at home. Hopefully, there will be a lot of Scottish supporters cheering for us”.

The matches will be the final time the GB team are in action north of the border before London 2012 and, with the squad to be cut from 14 players to the final 12 by head coach Harry Brokking within the next couple of weeks, there is no margin for error for the players.
“The coach has been pushing us really hard for the last couple of weeks because we’ve not had any friendly games” Lamont continues. “Certainly, nobody is showing any tiredness. We’re all pushing ourselves past our limits. It doesn’t feel as though the Olympics are just around the corner. I think when the final 12 has been selected then that’s when we’ll start looking forward to it more. We’re away from all the hype surrounding the Olympics because the squad is based in Sheffield. So we’re just getting our head down and training really hard every day. It’s only when we get down to London, it’ll really hit home”.

Lamont has just completed his first season with Lyon in the French Pro A League – one of the top leagues in the world – and impressed so much that the team have signed him for another season. The Scot has been with the squad since it first started out under Brokking in 2007 when they spent their first season together playing in the Dutch League for the Amstelveen-based Martinus. Lamont has grown in stature with the team and is in the form of his life as the Olympics approach. “The Olympics has given me the incentive to push myself even harder” he outlines. “After Martinus, I went to a better team in the Netherlands – Stap Orion, then on to Belgium and now I’m in one of the best leagues in Europe with Lyon in France. Playing there has definitely catapulted me to better things”.

But he has not forgotten his Scottish roots and the influence played by his first club coach, Tommy Dowens, currently the Director of Coaching at the Scottish Volleyball Association, which is based at The Pleasance. “I owe a lot to Tommy” he explains. “He was my PE teacher at Shawlands Academy and I wouldn’t be where I was in volleyball if it wasn’t for him. Not only because he first introduced me to the game but because of his knowledge and his desire to push players in the sport. Even though it is an amateur game in Scotland, he always had a professional attitude and that certainly rubbed off on me. Whenever I’ve gone to my clubs in Europe, one of the things they like about me is that I am professional – I’m always on time and I always push myself. So he has been a big influence on me”.