When we talk about opposites we must know it is so delicate position in volleyball. The players that perform as opposites very often win crucial points, thus they are always stars in their teams. But, which one to choose as best this season and put her in Dream Team? 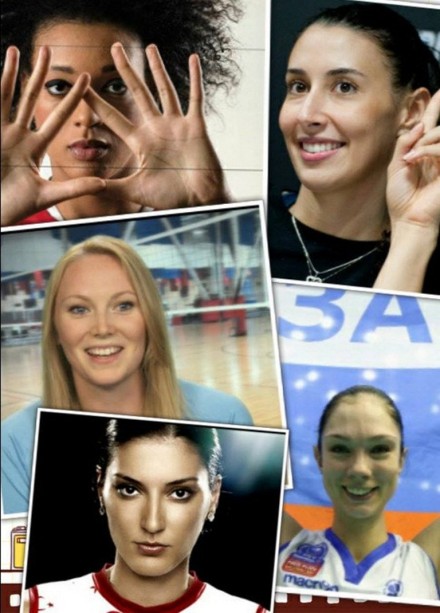 Sheilla Castro (BRA) has won the medal at Champions League F4 – the bronze with Turkish VakifBank İstanbul. Her team ended as top seeded after regular season in the national championship and qualified to the semifinal of Turkish Cup. But, what is the most important, her Vakif was crowned in the Super Cup of Turkey. This season Sheilla is the main option in the attack in her team. Take a look at Sheilla’s stats.

Valentina Diouf (ITA) is officially the best European opposite. She led Italian Unendo Yamamay Busto Arsizio to the Champions League final and in the end she won silver medal with her team. She is also the best scorer of the Champions League this season with 211 points in 11 matches (5.41 pts. per set). Valetina is until now the 8th scorer of the Italian league with 355 points. This season she took two silver medals before the one in CL – in Italian Cup and Super Cup. This is her stats in 2014/2015.

Neslihan Demir (TUR). Why is she on our list? Well, she is the champion of Europe with Turkish Eczacıbaşı VitrA and the best scorer of her team in the season 2014/2015. See Neslihan’s stats.

Nicole Fawcett (USA). She was so close to win the title in South Korea with hi-pass Zenith Korea Expressway. She was the second best scorer in V-League with 975 points and her team clinched the pole position in qualification phase. Before this season started, she has won gold medal with US national team at World Championship in Italy. See her stats.

Ekaterina Gamova (RUS) is still the most dominant opposite in the Russian national team and Russian league. Her Dinamo Kazan went to semifinals of the national championship with realistic chances to defend the title. She is simply the symbol of currently the best team in Russia whose member is since 2010.

Vote in our WoV Poll and decide who is the best male and female player and pick a Dream Team!

Gamova is dominating in Russia but Goncharova is better and for me Diouf is even better! But I must say that Tijana Boskovic is the most talented opposite!

Sheilla is the best.