The 2012 FIVB Volleyball World Grand Prix Preliminary Round is set to conclude this weekend with the five teams set to join China in the Finals in Ningbo yet to be decided. 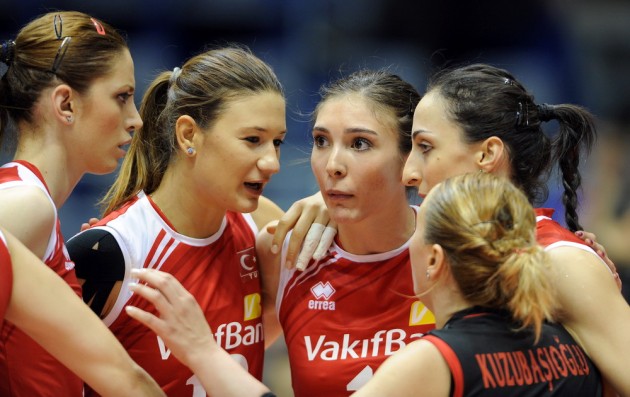 The only four teams mathematically out of the running are Chinese Taipei, Argentina, Dominican Republic and Korea. That means that everything will be on the line this weekend as teams jostle for position.

The top five sides will travel to Ningbo, alongside China, for the Finals, set to take place from June 27 to July 1.

Turkey will be keen to make their first Finals in Osaka, Japan this weekend. The CEV Continental Olympic Qualification Tournament winners currently sit third following five wins and one loss.

However, hosts Japan and Germany will be up for a the fight as both sit on the cusp of qualification so picking up wins will be vital for them if they want to progress.

Korea will want to finish strong

-This will be Germany and Turkey’s second match in World Grand Prix history and first clash this year. The two first meet during the 2008 edition with Turkey coming out on top in Vietnam

–Korea will want to improve their win-loss record against Asian rivals Japan, having won just 12 matches in 50 in all FIVB tournaments

Defending champions USA are close to booking their place in the Finals but face a tough opening match against European champions Serbia, who themselves are just outside the qualification places in 10th.

Hosts Thailand are also close to booking their place in the next round and currently sit fourth. But with the gap between the top teams so narrow, they will want to create a bit of breathing space in Bangkok.

Argentina will hope to end their tournament on a high as they look for their first points  in the tournament.

–Argentina have never beaten any of their pool opponents in any FIVB tournament, losing all eight encounters

–Thailand will need to pick up at least a point from their matches with USA and Serbia, but history is not on their side having lost all but one of their matches against the two, a seldom win over the US in 12 matches

China are currently level-pegging with USA on 18 points at the top of the standings, but with a berth to the Finals as hosts, they will not be feeling the pressure in front of their home fans in Luohe.

Cuba and Brazil, however, are far from guaranteed a place in Ningbo as they sit fifth and sixth respectively.

Puerto Rico are also still in with a shout at their first ever Finals spot, but it will take a couple of upset victories and results in other pools to go their way if they are to succeed.

–Cuba have the better win-loss record over Brazil in all FIVB tournaments with 22 wins and 19 losses. However, Brazil have the advantage in the World Grand Prix with 15 wins and six losses

–China have played both Cuba and Brazil 50 times, so will be familiar with both. However, they only have a combined 41 wins against their Pan-American rivals

Currently none of the teams in Pool L are in the top seven, meaning the winner of this group could prove vital to who qualifies.

Poland are closest to the pack in ninth but have a psychological barrier to overcome against Italy, who they lost to in the first round in Lodz.

The Italians themselves are in 12th with just that win over Poland to celebrate. They will need to overturn a huge deficit if they are to be in with a shout of making the Finals.

The Dominican Republic will want to turn the form book on its head while hosts Chinese Taipei will be eager to give their fans something to cheer about with their first win of the tournament.

–Italy and Poland’s clash two weeks ago was their 25th in all FIVB tournaments. Italy have a narrow advantage with 15 wins

–Chinese Taipei will not only be looking for their first win of the tournament this weekend, but their first win over any of their pool rivals in the World Grand Prix. Their win-loss record against all three stands at played seven, won none

-The Italians have a strong win-loss record against their group rivals, losing only four of their 23 matches against them