Japan are set to host Korea, Germany and Turkey in the third and final round of the 2012 FIVB Volleyball World Grand Prix preliminary stages in Osaka over the weekend. 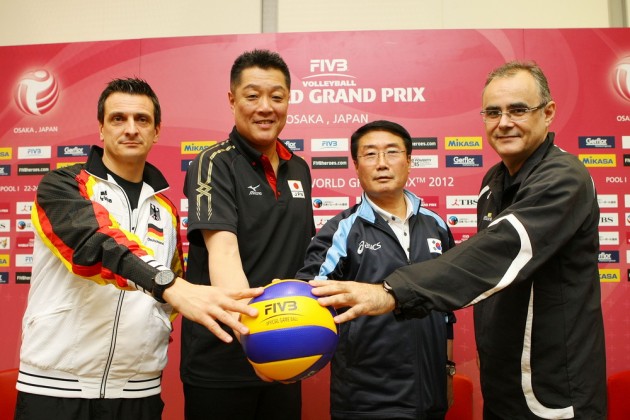 Turkey has the best record out of the four squads, with a 5–1 win-loss record and they will face Korea in their first match, while Japan will take on Germany.

Germany coach Guidetti Giovanni: “My team is in good condition right now. We played not too bad in the first two weekends. We lost three matches against the USA and Brazil, two teams who are playing well. There are three very strong teams here [in Osaka], and we’ll play day by day and do our best.”

Korea coach Kim Hyung-Sil: “After the qualifying matches for the Olympics our team condition was not very good. In Busan we had two players injured, and have four injured in total. So we’ll have to use some other members to compete in this round.”

Turkey coach Marco Aurelio Motta: “For us, everything is going well. We prepare for the Olympics week by week. We hope the third week [of this World Grand Prix] we can play better than in the first two weeks. We have no big problems right now, just some small issues we think we can manage. We’ll try to give our best effort during this tournament.”

Japan coach Masayosi Manabe: “Our team is also in good condition. It’s still possible for us to go to final if this round bodes better. So we will do our best.”

On which players he’ll use in this round: “I’d like to try some new players who have not played much in this tournament, in order to better prepare for the Olympics.*

Note in the team briefing that Japan reported a request to include number 16, Saori Sakoda, on their roster, in place of number 14, Yukiko Ebata, who was originally on the roster for the Osaka round, but has been injured.