Things remain tight in Pool D of the 2012 FIVB Volleyball World League Finals, and while Bulgaria's place in the next round is guaranteed as hosts, tension is high. 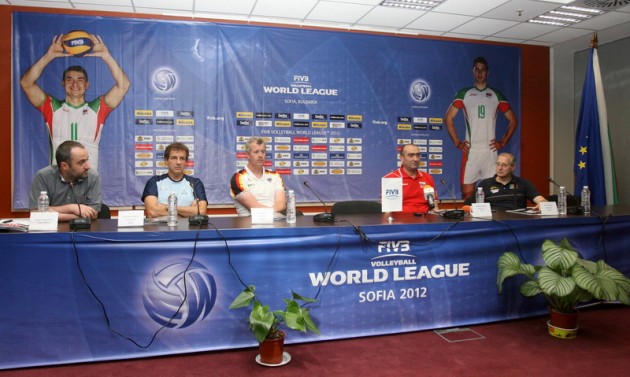 The coaches at the press conference on Thursday

Times have been rough in recent times having lost Matey Kaziyski and coach Radostin Stoychev, but the Balkan Lions are looking to recover in a short space of time to complete their aim of a medal in this year’s tournament.

Former captain and new coach Nayden Naydenov is keen to fill his players with a new sense of hope.

”I am hoping that I can make the boys feel calm and relaxed,” he said. “We want to improve the game and show the best of the the team, preparing for the Finals. We do not have much time, but it may be enough”.”

Meanwhile, the moods in the three other camps is a a little different.

For Portugal this tournament is a great way to get more experience and Argentina are testing the waters with some younger players. Germany needs only four points to reach the qualify for the next round and coach Vital Heynen is desperate to carry his team to their first ever Finals.

“The team hasn’t played in World League finals so far, so I’m going to make everything to change it.” he said.