Spain claimed the bronze medal at the 2012 CEV Volleyball European League – Men to maintain its status as the most decorated team in the history of the competition. The Spaniards defeated Slovakia 3:1 (28-26, 27-29, 25-20, 28-26) in the classification match in the Turkish capital Ankara and deserved its podium place at the upcoming awarding ceremony. 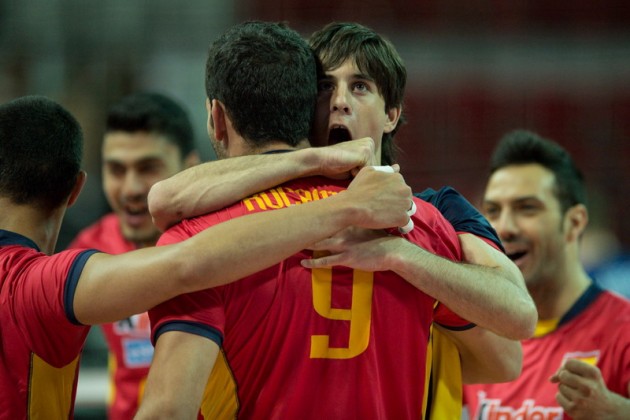 Spain was leading the score through almost the entire first set with the gap reaching as many as 6 points at 13-7.  Slovakia came back into the set not only to even the score at 20-20, but also to get the first set-point at 24-23 after Spanish coach Fernando Muňoz Benitez decided to give some rest to captain Guillermo Hernan and top spiker Iban Perez.  Spain survived this and then two more set-points for Slovakia before Hernan and Perez came back on court.  With Jorge Fernandez blocking for the last point his team eventually won the set by 28-26.

Both teams stepped up their efforts in offence and reduced the number of errors in the second set.  With Frantisek Ogurcak leading the Slovak attack, his team was able to take an early lead in the set, but only to give it away between the two technical time-outs.  However, it was again Slovakia that scored its 24th point first, but it could not utilize four set-points mostly due to serving errors.  In an unusual ending, Spain made a rotational error by putting the wrong player on court and presented the set to the opponent at 27-29.

Iban Perez’s attacks continued to give Slovakia a lot of hard time in the third set and helped Spain maintain control of the scoreboard.  At 21-16 the Spanish mentor was once again able to give Hernan and Perez some time off.  This did not change the status quo on the court and substitute Daniel Rocamora eventually put the last ball on the floor for the final 25-20.

It was time for Slovak setter Branislav Skladany to shine in the fourth set.  He organized some great attacking opportunities for Milan Bencz and Peter Kasper and helped his team stay on top throughout this period, or at least until Slovakia once again was not able to take advantage of its two set-points and the score was tied at 25-25.  Coach Muňoz had already made his usual substitutions and with essential contribution from them Spain was once again able to prevail.  Rocamora brought smiles to his teammates faces by acing for the last point of the match.

Iban Perez topped the scorers’ chart of the game with 22 points for the winning team, while Frantisek Ogurcak was the most prolific Slovak player with 16.

”We wanted to win, but we could not”, Stefan Chrtiansky, head coach of Slovakia, commented.  ”Our players were not mentally ready for this battle after yesterday’s loss.”  His Spanish counterpart Muňoz agreed that matches like this are hard to play.  ”Some of our players were tired after the five-set semifinal and this made our victory even more important,” he said.  ”We were tactically better than the opponents and this helped us control the game.  It was a tough tournament for us and I am happy to finish in the third place.”