The home team will battle the Netherlands in the big final of the 2012 CEV Volleyball European League – Men, scheduled to take place tomorrow afternoon in Ankara. The national team of Turkey qualified for its first ever final in the history of the competition after a dramatic 3:2 (28-26, 25-13, 24-26, 20-25, 18-16) victory in today’s semifinal against Spain. In a repeat of last year’s final, this time Spain and Slovakia will have to lock horns in a duel for the bronze. 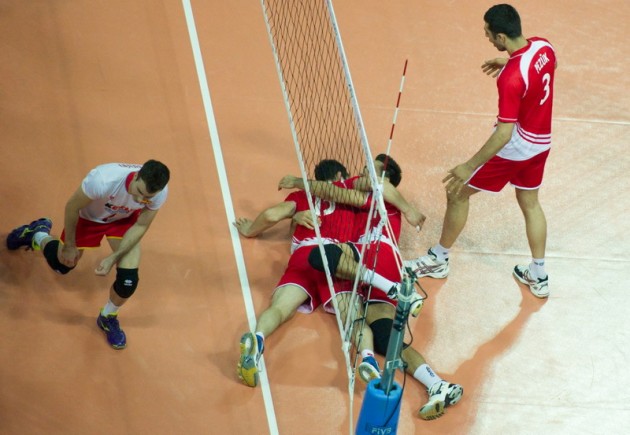 With Iban Perez and Jorge Fernandez performing well in spiking and blocking respectively, the Spaniards seemed to be well in control of the first set.  They reached a comfortable 5-point lead at 10-5 and were able to maintain it through the second technical time-out.  Cheered by the home crowd on the stands, however, the Turks gradually started peeling down Spain’s advantage with great effort by Serhat Coşkun in offence.  The score was tied at 23-23 and the exchange of point for point continued until an ace by Emre Batur gave Turkey the lead, to be followed by Coşkun’s final blast that made the crowd ecstatic at 28-26.

Inspired by this turnaround, the home team kept the adrenalin running and completely took over the second set.  Veljko Basic’s squad stepped up its blocking performance and greatly reduced its unforced errors, especially in serving.  They started piling up a lead and with 5 consecutive points at the end, with captain Ulaş Kɪyak doing a great job from the serving line, the Turks closed the set at an impressive 25-13.

Spain came back to the court very focused and started looking for a comeback.  Reducing the number of its mistakes, it was able to open a 4-point gap at 10-6 soon after the beginning of set 3.  Turkey responded with some prolific spiking by Batur, evened the score at 12-12 and took the lead at 14-13.  Spain stayed close behind, but at 24-23 the home team was at match-point.  As a ball reflected by the Spanish block was flying on its way out of the court and the crowd was ready to erupt, Batur unexpectedly dove in an attempt to dig it out – point for Spain.  This is where the team mentored by Fernando Muňoz Benitez started its great comeback.  It took the next two points to win the set and stay alive.

In set 4 Spain had the psychological advantage.  It overcame an early 2-point lead for Turkey and after taking over at 14-13 it never let go.  Setter Guillermo Hernan was doing a great job utilizing Spain’s attackers and in the end it was a hit by Gustavo Delgado that put the ball down for 25-20.

It was time for a tie-break…, and what a tie-break it was!  Continuing to be inspired by the support form the stands, Turkey started very strong, it took the lead and extended it to 4 points at 10-6 and then again at 13-9 with great contribution from Coşkun’s spiking performance.  At 14-11 the home team was once again at match-point.  But the end was nowhere near…  Once more, Spain resurrected from the dead to even things out at 14-14.  The Iberians were able to save two more match-points for Turkey, but then it was the kill block by Emin Gök that finally sent the home guys to the final.

Coşkun scored a total of 27 points to become the most prolific player of the match.  Batur added another 22.  Perez was Spain’s top scorer with 17 points.

”It is an important win for Turkish volleyball,” captain of the home team Ulaş Kɪyak said.  ”It was also a very interesting match for the spectators.  We won the first two sets, but then we slowed down while Spain started playing better.  They did not give up until the very end which shows what a strong team they are.  We are a young team and we should learn not to make easy mistakes.”  ”One should not make stupid mistakes in an important match like this,” Spanish captain Guillermo Hernan agreed.  ”The middle of the first set was the key point of the match for us, because this is when we started making our stupid mistakes.  We look forward to our match tomorrow.”

Head coach of Spain Fernando Muňoz Benitez shares this opinion: ”We started well, but then we made too many errors and could not control the match.  In some parts of the game we played well, but in others we played badly.”  His counterpart in the Turkish team Veljko Basic thanked the opponents for contributing to such an interesting game: ”They forced us to play better and better until the last ball of the match,” he explained.  ”My players won the first two sets and too soon they assumed that the match was already over.  But this is normal for a young team like this.  We did a good thing for the future of men’s volleyball in Turkey.  I am happy to play in the final match tomorrow.”

TUR W: Neslihan Demir-Darnel will be an...