Asian men's volleyball power Kazakhstan made a flying start at the AVC Men’s Club Volleyball Championship here with a one-sided 3-1 victory over a young Indonesian side in Pool C on Saturday. 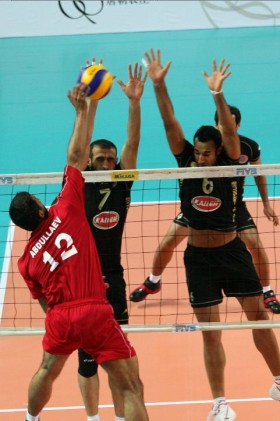 The Almaty Club of Kazakhstan made full use of their height advantage and power, taking the first two sets 25-22, 25-19, both in identical 21 minutes. With two sets down, the Samator Indonesian Club armed with several national team players, bounced back with a 26-24 win in the third set. But numerous errors by Indonesia in the fourth set surrendered a seemingly prosperous situation as the determined Kazakhstan never let their opponents any more chance, winning the set 25-17 and the match. Kazakhstan outstood Indonesia in all the three technical elements, spike, block and serve.

Kaleh Mazandaran Sports Club of Iran of Pool B swept over Uzbekistan in straight sets, 25-9, 25-19, 25-14, in 59 minutes. In the Iranian lineup are four national team players. Zarini Hamzeh led Iran with 10 points and Uzbekistan‘s top scorer was Addullayev Botier, with nine.

Thailand of Pool D downed Mongolia 3-0 (25-6, 25-20, 25-16). Kittikun Skuitthawong was the top Thai scorer, with 11 points while Davaajargal Altankhuyag topscored for Mongolia with 10 points.

Both Shanghai Tangdynasty Volleyball Club of hosts China and Vietnam had their Pool A opponents abstained the United Arab Emirates had withdrawn from the tournament and Afghanistan has not arrived in Shanghai yet by Saturday evening.