ECH M: Dutch team furious with Germans – “They played against us to lose!”

The Netherlands and Germany played a breathtaking match of the second round in Pool A at the 2015 CEV European Championship, but it will remain in the shadow of a possible calculation by one team. 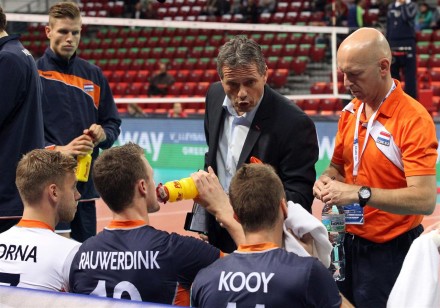 Dutch coaching staff accused Germans that they didn’t play at full strength against them and rested some players, obviously saving themselves for a decisive game today, against the Czech Republic. Thus, they apparently wanted to play with Bulgaria in knockout stage.

“I think that the German coach played to lose. It is not good sportsmanship, this is not fair play. The Netherlands would never do this. If I am the coach, I will never go to lose any game. Today will be a beautiful game. We are playing against Bulgaria. For the first time, we will play in front of 12,000 spectators and we are going to enjoy that game. We do not know how to beat Bulgaria. Now we are so tired from five sets playing,” Gido Vermeulen, the head coach of The Netherlands said after the game versus Germany.

Rob Bontje, one of Dutch players, partially agreed with Vermeulen.

“I never made the calculations before the game. That is why I do not know if the Germans wanted to lose or not,” the middle blocker stated.

TUR W: Can you guess the favorite songs of Eczacibasi players?

Germans do it in every kind of sports. Not a surprise. Many others also do it. No point in mentioning it. The format allows it.

Cuban Chapman adds „another brick in the...