Nicolas Le Goff is "a nice surprise". He was called the first time to play for France. Montpellier Volley middle blocker was one of the unexpected in the selection unveiled by Laurent Tillie. 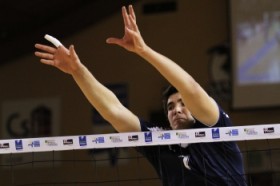 A full season in Ligue AM and a few meetings for France A team were enough to convince the coach to retain the 20-year for the qualifications for the next European Championship. From 14 years and his first volleyball license at the Sporting Club Nord Parisien, Nicolas Le Goff indeed continues to move up. He draws the attention of Cannes. There followed the first selections in the juniors, and came to CNVB Juniors. In 2011 he went to with Montpellier.

He was signed as the third center, Nicolas Le Goff could not expect much better. Size (2.04 m) does not replace the inexperience. The serious injury of Franck Lafitte, in the month of October, would quickly change that.

Along with Philip Schneider, Le Goff impressed. And learned: “Franck‘s injury forced me to play almost the entire championship. I had the opportunity to make much progress in one year. Next year there will be three on the job, it will not be quite the same. Laurent Tillie called me last week to tell me about the course to be held in late July. He told me he had been pleasantly surprised by my level in the league. Finally, when I got it, I understood that he wanted to enlarge the group. So I told myself that I was part of a list of 20-25 players. Only when I saw the list on the internet I learned that it was in fact in the selection of 14!” Repositioning of Kevin Le Roux, in the absence of Antonin Rouzier, has left a vacancy at the middle blocker position:”I am pleased to be selected, but I know I also took advantage of that, “he admits. Regardless, the youngest of the group simply wants to “enjoy“. So far, he was fairly successful.