Romania’s rookie Tomis CONSTANTA was drawn this past June 29 to preliminary Pool E of the 2012 CEV Volleyball Champions League – Men together with Turkey’s Fenerbahce Grundig ISTANBUL, last year’s silver medalists PGE Skra BELCHATOW of Poland and Dinamo MOSCOW, winner of the 2013 CEV Volleyball Cup. Having to cope with the demanding task resulting from this “iron Pool”, Tomis CONSTANTA has embarked on an ambitious project to build up a strong team for its first campaign in Europe’s most elitist competition. 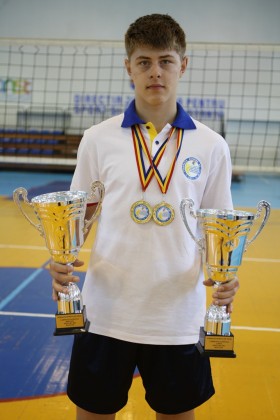 The Romanian club has signed Slovenia’s Radovan Gacic and Turkey’s Erkan Togan as head coach and assistant coach respectively, and is about to transfer a series of valuable players, starting with Montenegro’s wing spiker Marko Bojic who last year claimed Poland’s national league with Asseco Resovia RZESZOW and 2011 European champion Milos Terzic of Serbia, who completed a successful season with France’s TOURS VB. Romania’s Dan Borota – transferred from Stiinta Explorari BAIA MARE – and Venezuelan Maximo Antonio Martinez Montoya (last year in force with Pokka AE KARAVA of Cyprus) are also set to join Tomis together with Ukrainian Igor Merkushev, who is set to move to the shores of the Black Sea from Kommunalnik GRODNO, Finnish opposite Olli-Pekka Ojansivu (from Avtomobilist SAINT-PETERSBURG), Australian setter Shane Alexander (coming from Iran where he did play for Giti Pasand ISFAHAN) and two more international players from Romania, i.e. middle blockers Andrei Laza and Sergiu Stancu, who last season defended the honors of Remat ZALAU and Knack ROESELARE respectively. Only four players have remained in the group in comparison with last season and namely Moldovan setter Marin Lescov, middle blockers Andrei Spinu and Mladen Bojovic (SRB) as well as libero Vladislav Ivanov (BUL).

Additionally, 15-year old Adrian Aciobanitei (pictured), the real Volleyball kid of Constanta, is included in the roster for the 2013 CEV Volleyball Champions League. Aciobanitei debuted for Romania’s junior national team this past April in Zdar nad Sazavou, Czech Republic, in the second qualification round for the 2012 CEV Junior Volleyball European Championship and is currently a member of the U17 as well as U15 national squads. This young boy did already play for the senior team of Tomis this past March 5 in a match of the national league against Unirea DEJ. Aciobanitei is a rising star who significantly helped Tomis claim the U17 and U15 national championship at the end of the past season.

NORCECA W: Trinidad & Tobago with a win in a straight sets against Guadeloupe

AUT M: Title decision after round 7