OG W: Russia beat Team GB in straight sets for the joy of their Prime Minister

Russia beat the home heroines of Great Britain in three straight sets (25-19, 25-10, 25-16) on Saturday afternoon at Earls Court with Prime Minister Dmitry Medvedev also in attendance for the debut of the group coached by Sergey Ovchinnikov. 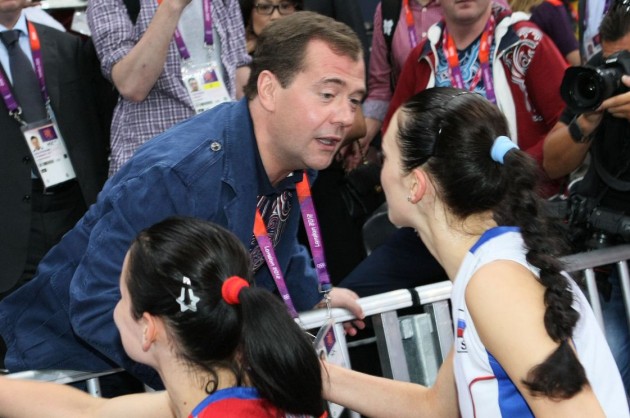 It was a confident display of strength and consistency by the 2010 world champions who were playing Team GB for the first time in history. In front of a 15,000 crowd Team GB made a good start in the first set going up 2-0 and 3-1 and keeping the score close mainly via the offensive power of Savannah Leaf, Grace Carter, Rachel Bragg and Lynne Beattie. However, once Russia really got into the game, Ekaterina Gamova and Nataliya Goncharova quickly imposed their supremacy, spiking from the back row and blocking for the final 25-19.

The 2010 world champions dominated the scene right from the start of set 2 as setter Evgeniya Startseva was commanding with real confidence the likes of Gamova, Goncharova and Evgeniya Estes, who is celebrating here in London her sixth Olympic appearance. The local side, on the other hand, made a series of mistakes from the serving line and even some good play by Lynne Beattie could not avoid a speedy 25-10 for Russia.

Team GB regrouped in set 3 with Beattie keeping the score tight and Ciara Michel killing some impressive spikes. However, Gamova and Goncharova – at the end best scorers of the match with 13 and 14 points respectively – once again were quick in re-asserting their rule, helped also by middle blocker Maria Perepelkina. The Britons could snatch some more points but never really clawed back with Russia finishing this off in three sets (25-16).

With this result Russia got to the top of the charts in Pool A together with Japan waiting for their next match on Monday against the Dominican Republic. Team GB will be bak in action on the same day to test out their likes against Africa’s champions Algeria.

OG W: “This was the highlight of my career” says GB captain Lynne Beattie