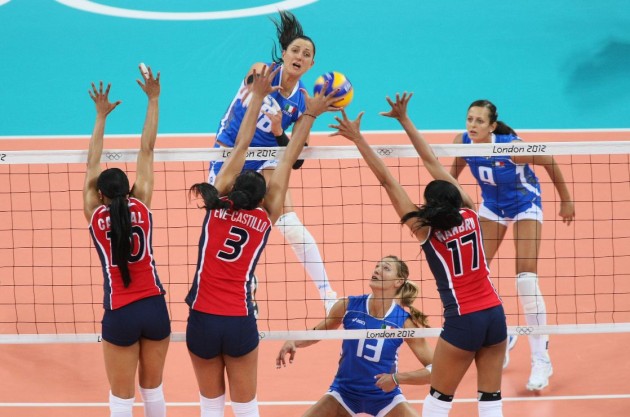 Gioli was effective in 13 of 22 spike attempts and was 6-for-15 in blocks. The winners held a slight margin in blocks (10-8) and won 4-1 the battle from the service lines.

In the first set, Italy quickly got out to an 8-2 lead, with the excellent blocking and spiking of Gioli proving decisive. Powerful spikers Costagrande and Del Core also landed some impressive shots. Cabral was the main source of points for the Dominican Republic as they battled back into the match, but Italy‘s intelligent play kept them ahead as they took the first set 25-17.

The third set was also very evenly matched. Gioli, Arrighetti and Costagrande traded points with Cabral and De la Cruz, while both liberos continued their outstanding showing. Eventually though, Italy‘s number of spiking options proved to be the crucial difference, and they won the set 25-19.

The fourth set saw Italy‘s consistency take them out to a lead, although the match remained tight with many long rallies. But, with all their key point scorers continuing to perform well, Italy pulled 17-10 ahead, and as the Dominican Republic became overly dependent on Cabral, Italy powered to an impressive 25-15 set win to take the match.

Italy next play Japan in the second round of preliminary matches on Monday while Dominican Republic take on Russia on the same day.

OG W: Russia beat Team GB in straight sets for the joy of their Prime Minister