To mark one month to what promises to be another milestone in the history of European Volleyball, the CEV are now disclosing more details about their #OneDayMore4Volleyball campaign which has been designed specifically to spread a real Volleyball fever across the whole of Europe. 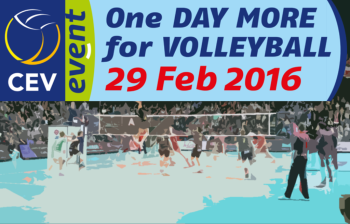 One day more for volleyball

This goal will be achieved by bringing people together from all the different paths of life, professional and non-professional players, young and old, regardless of their technical skills and physical abilities, in a spirit of friendship and fair play.

2016 is a special year not only because of the Rio Olympics where once again the world’s sports family will come together and celebrate humanity, but also because of the bonus of one extra day to enjoy life and do the things we love the most. The 29th of February only comes once in four years and the CEV will be making the day really count this year by engaging as many people as possible in playing Volleyball all over Europe.

“We are truly hoping that with the help of our National Federations we can turn this day into a spectacular and unforgettable experience for everybody involved, making it yet another milestone in the promotion and development of our beloved sport,” CEV President Aleksandar Boričić said.

On February 29, 2016 the CEV will be trying to set the record of most Volleyball matches played all over Europe in one day, thereby raising the awareness of the sport across all media channels while putting Volleyball in the spotlight as the first international sport to take up such a challenge.

This action is meant to showcase Volleyball as a sport for absolutely everyone, regardless of their physical abilities, technical skills, age, familiarity with Volleyball, etc. “We would like to see school children, teenagers, students, people from different sectors of the economy, etc. interact with athletes from our Clubs, Regional Associations, National teams, etc., in what could turn out to be yet another milestone in the history of European Volleyball,” the CEV President added.

The action consists in the organisation of one-set matches played up to 29 points across different cities and multiple venues in each country. The National Federations of Armenia and Northern Ireland, situated at the eastern and western end of the European spectrum respectively, have already confirmed that they will be hosting a number of such matches on February 29 and the CEV are currently gathering information and data from all other National Federations to have a first, rough estimate of the number of people that will be involved.

“We look forward to joining forces with thousands of Volleyballers to make the 29th of February 2016 a truly remarkable day for the European Volleyball family,” Mr Boričić said.

The event will feature extensively in all CEV social media channels (Facebook, Twitter and Instagram) and fans are invited to use the official hashtag #OneDayMore4Volleyball to go along with their posts reporting on the organisation of their respective events and matches.