Mexico lost against the United States in the last preliminary round match to define the leader of Pool A. USA won in straight sets 25-14, 25-12, 25-17. 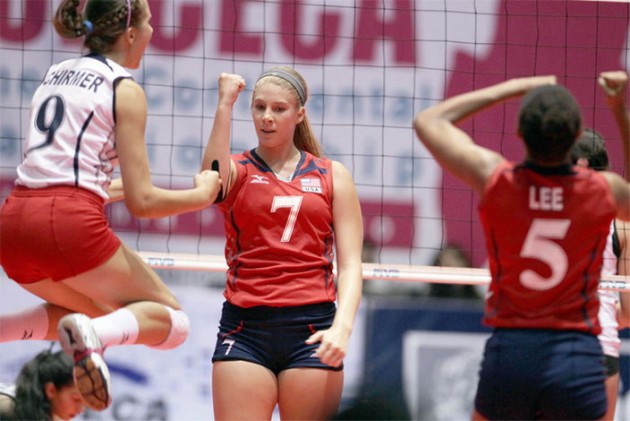 Carli Snyder and Simone Lee were the top scorers for the American team with 14 points apiece. Mexico’s leading scorer was Fernanda Guitron with 7.

“We knew from the beginning that USA was not going to be an easy opponent, but this will help us as a preparation to go on for our next matches. We did not communicate betwen us very well, por we can improve it,” said Mexican captain Ivonne Martinez.

“We did not play maybe because we felt respect or were afraid of the rival. You can’t do that. This kind of teams with maybe or maybe not on the same technical level as you thinks different. Has another mentality, a mentality to win and classify we didn’t showed that,” said coach Estanislao Vachino about Mexico.

“Tonight’s match was a really hard battle, we came here to execute our game plan. There was a lot of long rallies we pushed through. I am really proud of the team. We played very hard,” USA captain Taylor Tashima indicated.

For coach Reed Sunahara this victory gave an extra day to prepare for the semifinals. “Mexico played well and we did a nice job as a team coming together, This is the best we’ve played so far up to this tournament. Hopefully we can improve and get better as we progress”.

The quarterfinals will be played this thursday. Puerto Rico, second place of Pool B, will match Guatemala, third of Pool A. In the other match, Trinidad and Tobago, third in Pool B, will play against the second place of Pool A, Mexico, that lost against USA. The American team qualified to the semifinal as well as Dominican Republic, after finishing the preliminary round on top of their Pools.